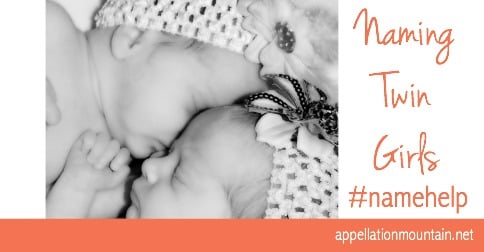 I am due with twin girls in a few weeks. I am seriously freaking out because there is not a second name I love.

Here is the background: We have a two year old named Charlotte Mia, after her dad and middle name after grandma.

Twin A will be Giselle Cynthia. I absolutely love the name and never second guessed it, plus Gizela was my godmother’s name, so that is a nice tie in. (I have less name regret when it incorporates some history!). My husband really wants my name as the middle name, and I’m not too hung up on middle names since they’re not really used.

Now for poor Twin B, the nameless baby! Absolutely nothing has felt perfect for any length of time. It’s such a horribly disheartening feeling. Here is the list we’ve been mulling over:

Adriana: This is my husband’s absolute favourite name. He wanted it for our first daughter. I like it, but not nearly as much as he does. My issue? The top supermodels in the world are Gisele Bundchen and Adriana Lima. Since they are twins I would loathe people thinking we were trying to match the twin names in this way. Ick! Thoughts?

Alexandra: Classic and regal, but too expected? I hate the nn Alex (husband likes it) but love Alexa. He also likes Lexi. No other connections to this name.

Aria: Musical and pretty, and husband is very musically inclined, but I dislike the very trendy aspect of it greatly. I don’t want it to look like we’re trying to be cool, if that makes sense.

Aurora: Another pretty name, but I don’t like Rory at all – my husband does. I worry about the rising popularity. A bit of a tongue twister name too?

Martina: Is this too old-fashioned? It is a family name, my husband likes it, and I’m on the fence. The connection to my aunt is nice though. I like how there is no chance of mispronunciation.

I love Sophia, but am not interested in a #1 name.

Her middle name will possibly be Josephine after my dad. Our last name is one of those long, complicated Dutch ones — a three-part last name starting with “van”.

Read on for my response, and please leave your helpful suggestions in the comments! 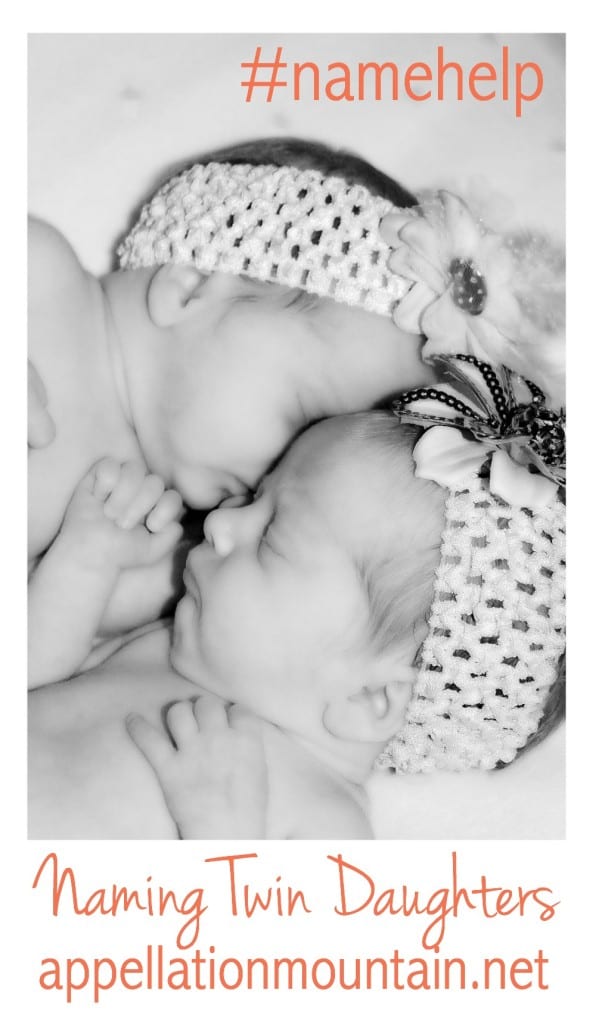 Congratulations on your daughters on the way! I love dreaming up names for twins – it seems like such a great opportunity to use two – or even four!- favorite names at once. But it can be incredibly difficult to find two names that work together without matching too much.

Here’s what jumps out at me: you’ve used exclusively family names so far. Both Charlotte Mia and Giselle Cynthia have ties to someone in your family for both their firsts and middles.

And so my immediate thought is this: why not name Giselle’s twin Josephine Martina?

I like it so very much for four reasons:

But maybe Josephine has already been rejected as a first name, or maybe it just won’t work for another reason. In that case, let’s go back to your list.

Adriana – I don’t think I’d sweat the supermodel connection. I do think of Gisele Bundchen – slightly – when I hear Giselle. But only slightly. And Adriana Lima is familiar to me. But there have been an awful lot of girls named Adrienne, Adrianna, and Adriana over the years. I don’t immediately think “cover of Vogue” when I hear the two names together.

Alexandra – I do think Alexandra is a logical choice, but it seems like you have a built-in nickname conflict. I tend to think it’s better to avoid a name with such an issue, unless it’s your absolute #1 name. Since it isn’t, I’d move on.

Aria – Aria is lovely, but you’re right – it has skyrocketed up the popularity charts! On the one hand, you know that this isn’t necessarily a problem. Charlotte is very popular, but it’s still a great name. The question is whether Aria will feel trendy, and I do think it’s a little bit of a mismatch with Charlotte and Giselle.

Martina – If Aria is too trendy, is Martina too unfamiliar? It’s very popular in the Spanish-speaking world right now, but in the US, Martina is definitely in style limbo. While I think it’s a great name, and the family tie is great, I wonder if it works better as a middle?

If none of those names are quite right, how about:

Ariana/Arianna – It’s a twist on Aria and Adriana, though it’s not related to either name. Arianna is a form of the Greek mythological name Ariadne. Still, Ariana opens the door to possible nickname Aria and sidesteps any supermodel connection. (Though, thanks to singer Ariana Grande, there’s still a pop culture tie.)

Adelaide – It seems like A names are really calling to you, but maybe Alexandra, Adrianna, Aria, and Aurora aren’t quite right. Adelaide has the same sweetly old-fashioned qualities of Charlotte and Giselle, and the -aide ending is different from -otte and -elle. Other A name options include Anastasia and Aurelia. Annabel is another possibility, but Giselle and Annabel sound slightly singsongy when I say them together.

Sylvie or Silvia or Sylvia – The Sylv- names are obvious substitutes for Sophia, and they’ve all seen an increase in use. I’m partial to Sylvie because, like Charlotte and Giselle, it feels ever so slightly French.

Genevieve – When French names come to mind, it’s impossible to overlook Genevieve. Are Giselle and Genevieve too matched for twin names? Maybe. It depends on how you feel about sharing a first initial. I don’t mind, but others tend to think it’s too much. It’s also a girl’s name that can be nicknamed, but often is not – and since Charlotte and Giselle are used in full, I think Genevieve would work best without a nickname, too.

Victoria – If you like Alexandra, but don’t agree about nicknames, maybe Victoria would appeal? It has the same ending as Sophia, and works well with Charlotte and Giselle. Victoria Josephine is super-regal; Victoria Martina or Victoria Martine is another option.

Louise – Or what about Louise? Like Charlotte and Giselle, it’s two syllables, has nicknames options but doesn’t really need any, and feels slightly French. It seems like a big departure from Adriana/Alexandra/Aurora, so I doubt it’s The Name – and yet, I like it so much with Charlotte and Giselle, I can’t resist adding it to this list.

I know our readers will have more suggestions, but I keep coming back to Josephine as a first name! If that is an option, I think it’s a logical one – especially because of this quote: “I have less name regret when it incorporates some history!” Agree completely with that statement, and it makes me think that Josephine could be the obvious choice for Twin B!

A million thanks to you and your lovely readers, as I truly can say the incredibly wise comments made by all of you impacted our decision. I felt all the advice and commentary was from the heart, and everyone tried so hard to be helpful. I was so happy to give my husband the name he’s always wanted and a big part of letting go of my reservations came from the genuine opinions of the readers who all said there is no connection made to the models, which was my main concern.

Sometimes asking too many opinions in real life can get agitating as people take it as license to criticize, it can get awkward if you decide on that name, and it starts to feel too personal. This was the answer I was looking for. The truth is one night awake just stressing about names, I said to myself, I just need a sign. The next morning I got your email saying you would do the column on the twins. I couldn’t be more grateful!