My husband and I are expecting our fourth child and second girl this October. We’ve always wanted a big family, and think we might even have one more baby after this one. Or even maybe two?! 🙂

Our children’s names are Elizabeth Anne, Daniel Edward, and James Henry. Not family names or anything. We sometimes call them Lizzie, Danny, and Jamie at home, but mostly Elizabeth, Daniel, and James.

Boring, right? Well, growing up, I hated, hated, hated spelling my name and how the ‘ee’ always seemed so cutesy-pie. I wanted my kids to have names that could pass the “Supreme Court Justice test.”

But now I’m worrying that we went too far the other way. We know kids named Ridgley (girl), Daxon, Henley (girl), Lorelai, Justice (girl), Arlo, and Jaxson. And there are more!

So … is a crazy name now so normal that our kids will stick out with their “safe” names?

My husband thinks that I’m being silly, and we should stick with the girl names we’ve had in mind for the last two pregnancies: Charlotte, Caroline, Eleanor, Rebecca, Amelia, Sophia, Claire. But none of them seem quite right any more, and he’s never really made the final decision.

His sister has daughters named Abigail and Katherine – Abby and Kate. So those or anything that sounds like them are out. Which is too bad, because Gabrielle was one of my favorites when we were naming Elizabeth, but now – Gabby and Abby? No thanks!

Our last name starts with H and ends with -on. 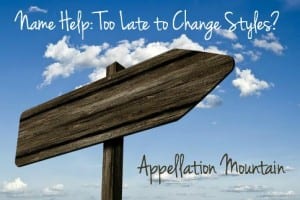 I think you’re having one of those 21st century parenting experiences. We reject Genoveva or Mercy or Bix because, well, who names their kids those things? We tell ourselves that we’re not celebrities and/or hippies, and therefore these names would make no sense in our far less glamorous/freewheeling corner of the world.

And then we go to a few playdates or maybe kindergarten orientation and we’re introduced to Persephone and Markham and – wait – is Raleigh a boy or a girl?

Suddenly it seems like our out-there list was completely ordinary, and we wonder if we shouldn’t have made a bolder choice.

So the moment of uncertainty you’re having is perfectly normal, and the good news?

You’re in one of those rare have-your-cake-and-eat-it-too parenting moments.

Let’s look at your options, as well as the specific names that fit with each strategy, as well as a few things that I’d suggest you avoid.

Strategy One: Choose something just as traditional as the names on your current list, but less popular.

I’m guessing that you meet lots of people with your kids’ names, across a wide range of ages. That’s the strength of traditional names. Looking at your current shortlist, only one of them is not currently in the US Top 100 (Rebecca – #183 and falling as of 2014), and both Charlotte and Sophia are in the current Top Ten.

There are lots of names that feel traditionalish. Rose is classic, Bluebell is out there, but Iris splits the difference. Or maybe Georgia or Dorothy? Daphne, Delia, Serena, Annika, Esme, or Maude?

One consideration is whether or not you’ll choose a name with nickname potential. Your first three children have nicknames, at least for family use. That makes me think that you’re better off with a name like Anneliese than one like Hazel.

This is a strategy that I truly love: stick with a traditional first name, then go big in the middle spot. Do you have names that you love, love, love but always considered them much too bold? Sarah Hadley, Grace Everild, Alice Magnolia, Julia Seven. The traditional first is an anchor; the less expected – or even unconventional! – middle is a fun surprise.

Strategy Four: Choose a popular name that isn’t quite a classic.

I can easily imagine sisters named Elizabeth and Penelope. Or Elizabeth and Josephine or Elizabeth and Madeline. None of those names are out-there, but that’s at least partially because they’re Top 100 choices, names that we’re hearing on lots of girls right now. You might even go a little farther afield. Elizabeth and Avery, maybe, especially if you chose a really classic middle name. Elizabeth Anne and Avery Charlotte, maybe.

There’s quite a bit of overlap between the strategies, and I think that speaks to how many options you have to choose something just slightly different.

Now, for a few guidelines:

Margaret seems like a sister for Elizabeth. Just as tailored and classic, with plenty of nickname options if you so choose. But it’s not nearly as popular.

Beatrice – Again, it’s a name that’s every bit as classic, but not as common. It’s also literary – think Potter, as well as Dante’s lost love.

Penelope – Penelope is very popular at the moment, but that’s a bonus in your case. While Penelope still feels a little bit quirky and offbeat, any name that climbs so quickly into the US Top 50 isn’t really out-there anymore. It shortens easily, too.

Dorothy – Dorothy is a vintage name. It comes from the same roots as Theodore and Theodora and Dorothea, so it’s certainly not novel. But it’s a bolder choice than many of the names on your girls’ list, and a rarer one, too.

Louise or Louisa – I think tailored Louise fits in slightly better with your shortlist. As classic as Charlotte or Caroline or Elizabeth, Louise is far more rare. Lucy and Lulu are charming nicknames for family use. It’s a little bit different, but only just.

Genevieve – I don’t think we can quite call Genevieve a classic, though it’s a name with long history. It’s got quite a bit of appeal today, too, ranked #210 and climbing as of 2014. In many ways, it reminds me of Gabrielle – French, tailored, but feminine. A very similar name option: Vivienne, or even Vivian.

In each case, I think you could choose a bolder middle name, too. Or maybe this is the moment for your beloved Gabrielle. It would make a great middle, too!

Readers, what would you suggest to Ashlee?