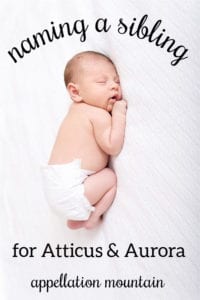 First of all, I just want to say how much I appreciate your website — I’ve always had a bit of a name obsession, so it’s nice to find a community that shares the same sentiment! Naturally, I was wondering if you and readers could give me some suggestions for my next baby.

I have a son named Atticus and a daughter named Aurora (Rory). For my next one, I’m kind of leaning towards another ‘A’ name, as a theme — but it’s so hard to find another one that DH and I agree on! And at the same time, I don’t want to feel like I’m limiting my options. I’d love to hear your opinions on this! Another characteristic both names share is that they are of Roman/Latin origin — purely unintentional, though.

My husband thinks Aria is trendy and sounds too similar to Aurora, but I think otherwise. Do you think you could weigh in and settle this for us?

On a positive note, they help focus your list. If you’ve ruled out the other 25 letters of the alphabet, well … that’s a lot of maybes ruled out from the start.

But it turns out that crossing so many names off your list at once can also be a drawback. Because it can reduce your short list to a list of zero!

To decide whether to stick with A or not, I’d ask two questions:

So now, on to the names!

A Brother for Atticus and Aurora “Rory”

Archer – Yes, it’s another A name. But the -r ending is different from your older children, and I think that makes a big difference.

August – There are lots of August names, like Augustus and Augustine. But I love August with Aurora and Atticus.

Ezra – Moving away from the A names, what do you think of Ezra? Like Atticus, there’s a sort of vintage, but completely unexpected vibe to this name. (Though it does rank in the current US Top 100.)

Felix – When you mentioned Latin roots, I immediately thought of Felix. It has a great meaning – lucky – and I think it pairs well with Atticus and Aurora.

Leonidas – Strictly speaking, Leonidas is Greek, not Latin. But it fits nicely with Atticus and the whole ancient world vibe. It’s more familiar than ever, thanks to the historical movie 300 telling the story of the warrior king.

A Sister for Atticus and Aurora “Rory”

Let’s talk about Aria. Your husband makes a good point about the name’s trendy quality. Aria debuted in the US Top 1000 in the year 2000, and has risen rapidly. But, but, but … Atticus hadn’t been in the US Top 1000 for over a century when it returned to the rankings in 2004. And while Aurora has a long history of use, it’s never been more popular than it is today – not even close.

So Aria feels like a sister for Atticus and Aurora. All were around as names back in the day; but I can’t imagine meeting siblings with these three names in, say, 1983. Or even 1991.

That said, I do think the repeating R sounds with Aurora could trip up the tongue. Plus, if you find yourself shortening Aria to Ari? Ari and Rory sound confusing.

So it’s not a no – but I’m not sure it’s the best choice. Let’s look at some more ideas.

Alethea, Althea, Anthea – What would you think of a longer A name that shortens to Thea? It could be the best of both worlds. Alethea is my favorite – it comes from the Greek word for truth. Though they’re all appealing – and quite rare.

Alexandra, nn Sasha – If you stick with the traditionally feminine formal name, boyish nickname pattern, would you consider Alexandra, with the nickname Sasha?

Arielle, Ariella – If Aria isn’t quite right, I wonder if something longer would work? I really like the idea of Arielle or even Ariella for a name that’s distinctively different from Aurora, but still shares much of Aria’s sound.

Eloise – Or maybe another vowel-forward name would appeal? Eloise has plenty of cute nicknames – Elle, Ellie, Lou, Lola, Lulu – and it sounds great with Aurora and Atticus.

Emery – Leighton strikes me as a little bit of an outlier on your list. It’s almost unisex – though the Leigh- spelling leans feminine. But I wonder if your daughter is most often Rory? Because if that’s the case, then something like Emery might be a great choice. It’s very different from Aurora, but Emery “Emmie” and Aurora “Rory” feel nicely balanced.

Sienna – Or maybe something completely different? I can imagine Aurora’s sister being called Sienna. They feel romantic, elaborate, modern but rooted in the past.

Overall, if you stick with the A theme, I love Archer and Alethea “Thea” for your next child. But if moving away from A matters, I think I’d lean towards Leonidas and Sienna.

Before you decide, I really think the two questions at the top matter most: how big a family can you imagine? And how devoted are you to keeping the theme?

Readers, I feel like I’m missing some great suggestions. What would you add to my list of A names? Or alternatives for sibling names for Aurora and Atticus?