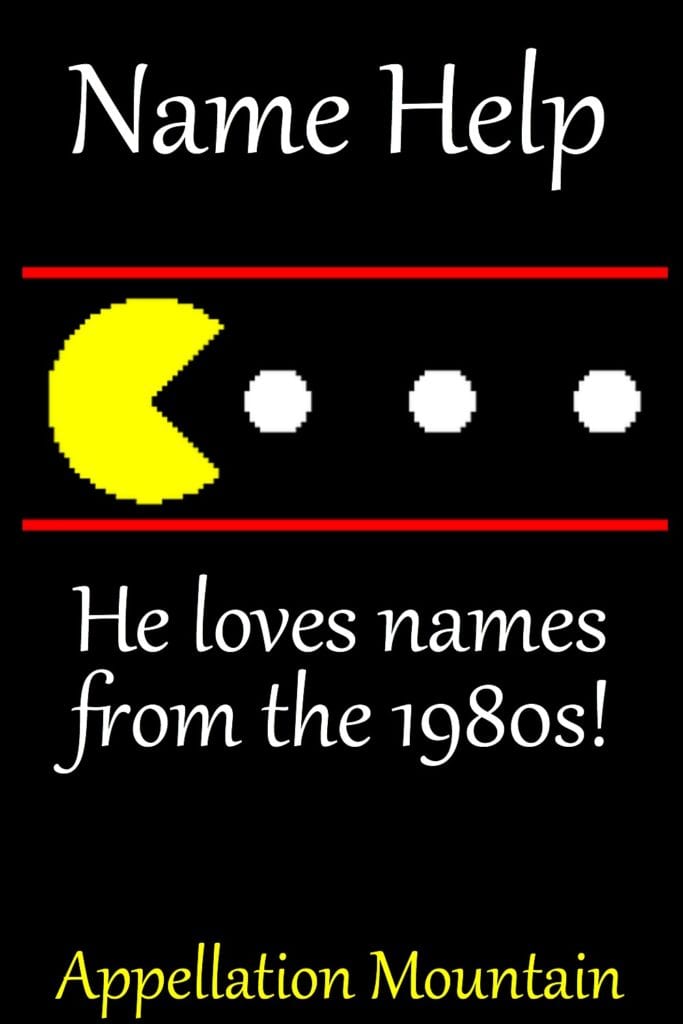 Our first baby, a girl, is due at the end of November. My husband’s list of favorite names is straight outta the 80s. He likes Allison, Amanda, Rebecca, Kimberly, and Melissa.

My thought was “Wait, what? You want to name our baby after the cheerleading squad at my high school?”

My second thought was, “Wait, some of those names aren’t that bad.”

He also pointed out that one my favorites, Sloane, is pure Ferris Bueller which is pretty darn 80s. Other names I suggested are Hadley, Rory, Piper, Margot, and Quinn. He doesn’t hate them, but he keeps going back to his list.

So maybe we’re doomed to relive the Reagan era? Should I get the baby some little legwarmers and a scrunchie and call it good?

Please read on my for response, and share your thoughtful suggestions in the comments.

Neither style preference is wrong, but at first glance, there’s no obvious middle.

The good news is that it’s also a really common place to be, and pretty much every one of those kids ends up with a name. I don’t know of a single child who was still nameless at her first birthday party, so … it can be done.

For reasons I can’t explain, fathers often seem to like names that were current during their own childhoods. Maybe those names strike them as an acceptable shortlist of “normal” names. Maybe they’re not paying attention.

Or maybe they are great names, and there’s no reason to drop them from our shortlists. I have a soft spot for Allison. And I tend to agree that Amanda should be timeless, even if every Amanda I know is thirty-something.

Forget about popularity, though, and here’s what strikes me about your two lists:

Sabrina – Some names rocket into the Top Ten and feel tied to their generation. Linda just retired from your office; Sophia just started kindergarten. Other names prove elusive. Sabrina appeared in the US Top 100 – very briefly – in the 1970s and again in the 1990s. Seldom heard before the 1950s, Sabrina can’t be pegged to the 1980s. And yet, it reminds me of Melissa and Rebecca. I think you might like it because it can shorten to breezy, modern Bree.

Delaney – Three-syllable, ends-in-y names are an enduring presence in the US Top 100. But the names themselves change quite a bit. 1930s Dorothy gave way to mid-century Beverly. Twenty years later, Kimberly and Stephanie reigned. Today, the equivalents might be Avery and Everly. But I think Delaney makes a good familiar, but not too popular choice. It reminds me of your husband’s Kimberly, but also Hadley from your list.

Valerie – Valerie reminds me of Margot – modern in feel, but not at all new. The name boasts a long history of steady use. With three syllables, I suspect it might please your husband. But the V makes it very modern, a sister for Ava or Olivia.

Vivian – While we’re working with the letter V, Vivian also strikes me as a middle ground name. Strictly speaking, Vivian languished in obscurity during the 1980s. But in 1990, Julia Roberts starred as Pretty Woman’s Vivian, and the name began a steady rise.

Paige – Let’s look at compromise names based on Quinn and Sloane. I briefly considered Brooke, but maybe Paige is a little less obviously tied to the 1980s? That’s because the name became a 1990s favorite. Supernatural series Charmed ran from 1998 through 2006, featuring sisters called Piper, Prue, and Phoebe. In 2001, Paige replaced Prue. That reflects the trends as much as it sets them. Paige is fading today, but I don’t think it feels dated.

Lorelei – Maybe it’s because I binge-watched Gilmore Girls this summer, but Lorelai, nickname Rory, lately seems like a very appealing name. I’m not alone, either – the name currently ranks in the Top 500, it’s most popular ever. Lorelei is a three-syllable name, so that might appeal to your husband – but it opens the door to using Rory from your list, too.

Laurel – Laura and Lauren dominated the Top Twenty in the 1980s, tying the sound to the decade. Nature name Laurel caught on, too, but it never reached the same heights as the other Laur- names. Because nature names are huge today, it still feels current.

Juniper – Maybe this is a long shot, but Juniper comes to mind. It has the rhythm of 1970s chart topper Jennifer – which remained a Top Ten pick through 1991. Juniper shares the energy of Margot and Piper, and feels thoroughly modern.

At the end of the list, I’ll admit that I’m stumped.

Part of me agrees with your buy-the-legwarmers suggestion. If you decide to go that route, may I suggest Allison? It remains in the Top 100, where it has ranked every year since 1974. That makes it more of a modern staple than a former favorite. We’re constantly coming up with new names like Allison – Madison, Emerson, Ellison – but Allison stays in the picture. Credit to Elvis Costello’s ballad, maybe?

If you try to build a compromise list, I think there are dozens of possible suggestions to ponder. And so, let’s throw it open to the readers.

Would you stick with a name from the 1980s? Or are there more great compromise options to consider?