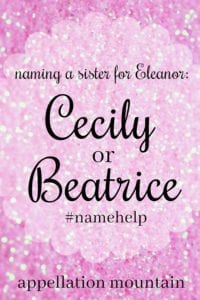 We are expecting our second daughter in mid-July. She will be baby sister to Eleanor Alice and we have narrowed names down to a shortlist of two: Beatrice and Cecily.

My American husband (who moved to Australia 14 years ago) carries a French surname, seven generations after the family migrated to the US. It begins with a ‘C’ and it’s quite lovely but, from a practical sense, meant we wanted a name that would straddle the Anglo-Franco divide well.

Eleanor, a long-held favourite of mine, became the obvious choice (not least because the most famous bearer was Queen of France AND of England) and, happily, complements the chosen middle name of Alice very well.

There are certainly no regrets with our first choice but we now find ourselves torn with where to head for her sister. The middle name is likely to be Alexandra.

I am not keen to introduce a third option, unless there’s a really compelling case. Here’s where I stand:

Cecily – My favourite, which I had earlier abandoned because my husband hated the sound. There’s a chance he can be talked into it. He much prefers Cecilia but, for me, it’s Cecily or nothing; I don’t want to be reminded that I got 80% of the way to perfect. As a friend with similar naming taste pointed out “It’s the name of another Mother of Kings!”.

Beatrice – Solid and stately without being fashionable. It’s probably somewhat more familiar to people than Cecily, a name that my husband hadn’t come across before I suggested it. I think it’s a really good choice and, on paper, it seems like it might be more of an obvious sibling name to Eleanor but it doesn’t sound as pretty as Cecily to my ears.

I could really use some impartial insight and observations on these options.

This is the hardest kind of decision. Your husband doesn’t like the name you love. That means that Cecily is, practically speaking, not an option.

He’s offered Cecilia as a substitute. That sounds reasonable. Especially if you consider the name’s history. It starts with the Roman family name Caecilius. A handful of fascinating historical figures bear the name, including a seventh century Berber Christian king of Altava, in modern-day Algeria; a banker whose house is preserved in the ruins of Pompeii; and a first century saint sent to evangelize Spain.

According to the rules of Latin, the name becomes Caecilia when feminine; and spread from there to many European languages. The French use Cecile. The Germans shorten it to Silke and Zilla. But the English? They wrote Cecilia in official records, but used Cecily in everyday speech.

That’s true for many names. Margaret became Margery, and later Marjorie. So the difference between Cecily and Cecilia, one might think, is slight.

But that’s not the case for you. To your ears, there’s a chasm between Cecily and Cecilia. One form you love; the other form feels like a pale substitute.

One thought: would you consider Cecile instead? To me, it’s more faithful to Cecily’s soft sounds than Cecilia, and because it’s tailored but feminine, it sounds like a sister for Eleanor, too.

If there’s not a compromise between the various forms of the name, then that leaves Beatrice.

And Beatrice is, as you say, a really good choice. Eleanor and Beatrice sound like sisters. It’s a strong sound, but there’s lots of history and romance to Beatrice. The author Dante loved Beatrice Portinari in real life; in literature, he transformed her into the Beatrice of The Divine Comedy. I think that makes this name a rather spectacular match to Eleanor. And just like Eleanor can be

And yet, here’s what strikes me: if Cecily was your first choice, and Beatrice your second, I don’t know that you’d be writing. It sounds like Beatrice is, for you, merely adequate.

So I have to ask: Will you be content naming your daughter Beatrice?

If the answer is yes, then Beatrice gets my vote. It satisfies you both. Yes, you’ve sacrificed your favorite name. But parenting is a partnership, and we inevitably compromise on all sorts of matters related to raising our children.

But what if Beatrice doesn’t feel like your daughter’s name, and your husband can’t come around to Cecily?

Then I wonder if you might consider starting fresh.

I know you’re not looking for new suggestions, but I think that might be what you need right now. There are two possible outcomes of starting with a blank sheet of paper:

First, you might find that you really are just fine with Beatrice. Or, alternately, it might help your husband warm to Cecily. Sometimes the process of eliminating more options actually makes your original shortlist feel more appealing.

Second, of course, you might find a name that you both love.

If you’re willing to consider alternatives, might I suggest Sybil, Caroline, Genevieve, Celeste, Colette, Sabrina, or Selena? Plenty of these have a soft C sound, but they all offer plenty of strength, too.

Maybe the first step is this: have you confirmed that your husband is definitely opposed to naming your daughter Cecily? Sometimes the names we reject early in a pregnancy feel more reasonable as time goes by. It was new to him when you first mentioned it; perhaps the passing of weeks will have added to its appeal?

I’m going to add a poll, but let’s try it with three options: Cecily, Beatrice, or start fresh.

Readers, what would suggest to Sandra and her husband? Have you been stuck between two names with your partner? How did you resolve your disagreement?