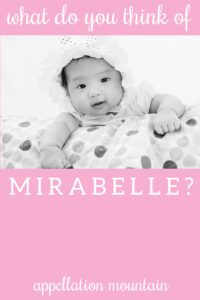 About ten years ago, I thought I’d found the perfect name for a daughter. It sounded like lots of popular names, but wasn’t even in the Top 1000. It had a great meaning and was easy to say and spell. And it is an M name, just like mine and my mom’s name, too.

Now I’m actually expecting my first child, and it’s a girl, and my partner is completely on board with Mirabelle.

On the one hand, there’s nothing about the character that puts me off the name. As fictional heroines go, I wouldn’t mind sharing my name with her at all.

But people will almost certainly think that we named our daughter after Mirabel Madrigal. And that’s another thing: in the movie, it’s Mirabel, but I always pictured it spelled -belle.

Will it be annoying to have people think of the movie every time they hear her name? Will Mirabelle be the next Isabelle, and all of my attempts to give my daughter a unique name fall apart?

We’re willing to consider other names, but my due date is August 22nd, so I feel like we’re running out of time.

If you’d asked me this question way back in 2008, when Appellation Mountain was just a tiny hill of a site, I might’ve answered differently.

But something has changed over the last dozen or so years. I’ve called it post-Khaleesi, but it started pre-Game of Thrones.

While we’ve always taken naming inspiration from fictional characters and song lyrics, we used to be subtle about it.

Luke soared after Star Wars debuted in 1977. But not Lando or Leia or Han – at least not in really big, sustainable numbers.

We preferred familiar-ish names that were used for heroes. Or at least characters with admirable qualities.

Now? Kylo and Anakin chart, along with Luke and Leia. So do lots of names borrowed from all sorts of fan-doms and fictions. Many of them are intentionally other-worldly, not the kinds of names you’d stumble out outside of science fiction and fantasy.

If we can name our daughters Mazikeen after Lucifer’s demon sidekick?

Borrowing from popular culture in an open way is socially acceptable today. That opens the door for Mirabelle.

But that doesn’t mean that Mirabelle is the next big thing. On the contrary, Elsa spiked in use, then tumbled post-Frozen. So it’s not a lock that a pop culture hero (or villain) will send a name soaring.

But Mirabelle works for other reasons, too.

In general, if the parents don’t have a clear preference, I think it’s best to use the dominant spelling, assuming one exists. When a name is as rare as this, though, it’s not quite so clear.

That’s not a strong vote in favor of Mirabelle, but we tend to prefer -elle over -el and -ette over -et, so I’m guessing that Mirabelle wouldn’t cause any problems. In fact, I suspect most people would assume it’s -elle.

All of this is a very long way of saying that I think Mirabelle is just perfect.

Yes, Encanto. And yes, it might become more popular in future years. But somehow I don’t think so – at least not in a frustrating way.

It’s your top choice, and satisfies all of your criteria. I wouldn’t change my mind.

Readers, over to you. Do you think Mirabelle will be too tied to the movie? Or become wildly popular in the coming years?