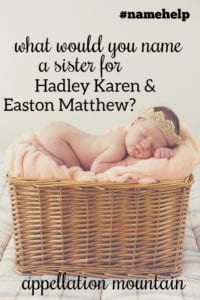 We’re expecting our third and final child in a few weeks. We aren’t finding out the gender in advance, but if it’s a boy, his name will be Parker James. If it’s a girl, we have a long list, but no favorites.

Our older kids are Hadley Karen (my mom’s name) and Easton Matthew (middle name for my husband).

We have a list of girl names from our last pregnancy: Peyton, Vivian, Kinsley, Finley, and Emerson. My husband also really liked Annabelle, but it’s too frilly for me. I always thought I would name my first daughter Alison, but it seems like a mom name now.

Hadley might have been Mackenzie, except good friends of ours already had a Mackenzie.

We’re not sure about middle names, but we do think that none of the names on our list are right. Help!

Here’s what leaps out at me: Hadley and Easton are clearly surname names. They both claim roots – Hadley brings to mind The Paris Wife, and Easton appears all over the map. So they’re modern favorites, not invented, but seldom heard on children in big numbers until the last dozen years or so.

Peyton, Finley, and Emerson fit that pattern. So does your boy name, Parker, and Hadley’s almost name, Mackenzie. Kinsley almost fits, though it feels more like Ryker – a surname in style, but a little on the creative side, maybe less likely to be found on Harvard’s crew team circa 1919.

Annabelle and Vivian feel more like outliers, as does Alison.

But if you’ve been considering most of these names for years, I’m not surprised they feel a little tired. Parents often feel like names belong to a pregnancy – or perhaps a moment. Only rarely does our list from our first child still work when we’re welcoming baby three or four.

So let’s find some new names in the key of Hadley and Parker and Easton.

Langley – Lots of -ley names have caught on over the years, from Ashley to Everly. Langley feels a little less discovered, rarer even than Hadley. But … is it too close to Hadley? Or the perfect match?

Hollis – It reminds me of 70s favorite Holly, but with a very current twist.

Maren – Maybe Maren splits the difference between surname names and more traditionally feminine choices? While it can be a surname, Maren is often considered part of the Mary/Margaret family. Or it ties back to the Latin marinus – of the sea.

Parker – Here’s a thought – if this is your final child, would you consider Parker for a daughter? It ranks #96 for boys and #162 for girls … which makes me think it could be great for a daughter, too, especially with a more conventionally feminine middle. Parker Jane, maybe?

Piper – Of course, part of Hadley’s appeal might be the name’s status as a surname used primarily for girls. The same is true for many of your favorites, like Mackenzie. So maybe you’d like Piper? Similar in sound to Parker, but with a strongly feminine vibe.

Quinn – Quinn might be considered Parker’s opposite – it’s far more common for girls at #84, but it still ranks #384 for boys. Still, that makes it more like Piper and Hadley, and maybe a perfect fit.

Winslow – It could be that Winslow is just too rare to consider, but I do think some of the o-enders could be good candidates. There’s Harlow and Marlowe, too, of course.

From your list, my favorite is Emerson. I think it feels very much like a sister for Hadley and Easton (and Parker, too, should it come to that) while still being different enough.

Overall, I’d put Emerson and Piper at the top of my list, but I feel like I could keep suggesting names forever!

Readers, help me out – what are your favorite girl names in this category? Which ones go best with Easton and Hadley?