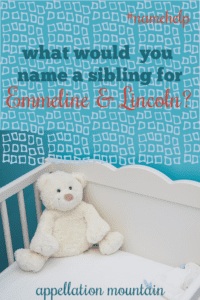 My husband and I have a girl and a boy called Emmeline and Lincoln, and we’re expecting our third – we don’t know if it’s a boy or a girl yet, and it would really help us out if you could give us your thoughts on both!

For girls, we’ve thought of a couple: Delilah, Natalia, Aurora nn Rory, Sophie, Camilla & Leighton. We like Alaska too, but we think it may be a little too trendy and “out there”.

For boys, we like Rowan and Parker. We’re a little short on boys names as you can tell!

If you’ve got any suggestions because we’d love to hear them! Sending love from Singapore.

Before we go any further, let me confess: baby name trends in Singapore are a mystery to me. I know that English is widely spoken, along with Chinese, but it took a Google search to tell me that the official language is Malay, with Tamil commonly spoken as well. So while English is dominant, there are lots of other influences to consider – and I’m probably going to miss those completely. Any help from readers is much appreciated!

But it sounds like your naming style is pretty consistent. Your older children have names that are familiar, but not Top Ten. And while they’re not necessarily names you would have heard in use fifty years ago, they’re not invented or completely new.

Naming a Sister for Emmeline and Lincoln

Your older kids’ names make me think that Alaska does feel a little too out there – unless, of course, you have a great story about what inspired the name. Absent a clear answer to “why did you name her that,” I’d probably move on.

From your other choices, I think I’d also rule out Leighton. It’s a gorgeous choice, but sounds similar to Lincoln and it’s different from Emmeline, at least in terms of style. It’s more modern and unisex, while Emmeline feels more like a traditional, tailored choice.

That leaves Delilah, Natalia, Aurora/Rory, Sophie, and Camilla. I think any of them would work nicely, though I think my favorite is Sophie. Except I wonder if it sounds off with your surname? That puts Natalia and Camilla at the top of my list.

Annabelle – Emmeline and Annabelle just sound like sisters to me! But is Annabelle a little too popular for your tastes?

Antonia – Despite being a long-established name, Antonia is often overlooked. But it reminds me of Camilla from your list.

Celeste – Celeste is a neat, compact, complete name. And yet it brings to mind starry night skies – a surprising set of contrasts, in one simple name.

Charlotte – It’s popular throughout the English-speaking world, thanks in part to the princess. But it’s very much a sister for Emmeline.

Juliet – Juliet feels literary and romantic, without being a frilly, elaborate name. I love it with Lincoln and Emmeline.

Marina – Because Delliah, Aurora, and Camilla are more conventionally feminine, with those -a endings, I wonder if you’d like Marina?

Victoria – As feminine as Delilah and Aurora, but with all the strong will of the legendary queen. (I know Singapore has history as a colony of Great Britain – is that an issue? Apologies if it is …) Lincoln, Emmeline, and Victoria sound like three distinct names, but of equal weight and complementary style.

So I’d make Juliet or Victoria my top two picks.

Naming a Brother for Emmeline and Lincoln

Rowan and Parker are perfect! I can’t decide between the two, and I’m tempted to say something super-unhelpful, like maybe flip a coin?

Instead, I’m going to suggest a few fresh ideas – and then tell you my favorite!

Bennett – I almost suggested Emmett, but that’s way too close to Emmeline! So how ’bout Bennett instead? The classic first syllable – Ben – makes this feel more like a first name than not. But that ‘tt’ ending sounds like it would work well with your last name.

Harrison – A longer first can work well with a shorter surname, too.

Jackson – Yes, it’s wildly popular. And yet, it’s a great name, bringing to mind the artist – Pollock – as well as so many characters called Jack.

Owen – Of course, nothing says that Lincoln’s brother has to have a surname name. Owen works well, I think, with both of your older kids’ names.

Walker – Since you’re considering Parker, would other -r ending surnames, like Walker, appeal?

Overall, I’m most drawn to Parker. I think it’s a crisp and polished name that sounds great on a child or an adult.

But I know the community will have some great suggestions, so readers – over to you! What would you name a sibling for Lincoln and Emmeline?