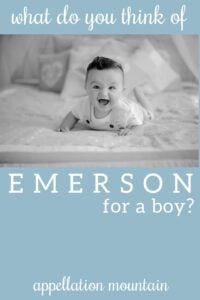 How do you feel about Emerson for a boy?

We love the Ralph Waldo Emerson reference, and the sound of Emerson, too.

But is it pretentious? Are there any good nicknames for a boy?

Our due date is in August.

But I do have a different reaction to Emerson for a girl versus a boy. While there are plenty of names I like equally, regardless of gender, names often carry a different image when I imagine them as masculine or feminine. (Should they? Maybe not. But I’m probably not alone in this.)

For a girl, Emerson reads like a successor to Madison and Addison. It’s a name that naturally shortens to Emmy, which also makes it a cousin to classic chart-toppers like Emily and Emma.

For a boy, though, it feels different. It’s more Ralph Waldo than Harper’s sister. That makes it maybe a little more traditional and enduring, a name with a certain amount of gravitas.

I think that might be what you’re after, and yet a caution:

Any name used in significant numbers for boys and girls may feel more popular than you expect.

Names like Georgia and Faith are given to girls in similar numbers. The same is true for boys’ names like Malcolm and Tobias. But because Emerson appears on both lists, you’ve significantly increased the chances that you’ll encounter another Emerson.

Still, I’d call Emerson a mainstream choice, even if it isn’t a common one.

Your son would experience his name as perfectly normal, especially in a class with children named Carson and Jackson and Hudson.

Plenty of people – maybe even your son’s grandparents – may find Emerson an unusual name. While it’s been around for ages, and actually appeared in the US Top 500 from the 1880s through the 1920s, it’s still always been relatively rare.

And, of course, the Ralph Waldo association is powerful. Most people have heard of the writer, and his work continues to resonate, ages after he lived.

Now, an interesting question: Is it pretentious?

Not because of Ralph Waldo Emerson.

But maybe what you’re feeling is this: there’s sometimes a sense that the only family names you can use are your family names, from your distinguished relatives, preferably with a house on the historic register and maybe a college building or small museum named in their memory.

Maybe it feels a little like you’re naming your child Thurston Howell III. But, hey, that’s a Gilligan’s Island reference. The show left the air in 1967.

The world has changed dramatically since then. Names like Carter and Madison – no family connections required – have long been popular favorites.

I know “everyone is doing it” isn’t necessarily a satisfying answer. But that’s pretty much it: surnames as given names are completely normal now. Feel free to dismiss any lingering sense that it’s too try-hard.

And the last question: what can you nickname a boy Emerson?

Before we talk about nicknames, consider that kids are much less likely to use nicknames today. The number of kids I know who are Sebastian-not-Seb and Isabella-not-Bella is significant.

And then factor in that names that don’t conform to gender are less of a concern than ever before. Even with kids.

They’re growing up in a world of boy and girl Rivers, Charlies, and Rileys. Emerson fits right in.

In fact, I imagine you could call your son Emmy at home and it wouldn’t be a thing.

But why not just Em/M? It brings to mind lots of single-syllable masculine nicknames: Ben, Sam, Dan, Joe.

If a middle name isn’t set, you might also choose something starting with J. Emerson Jasper = EJ, which I think works quite well. (Or Emerson Joseph, Emerson Jude, Emerson Jones.)

And there’s always Sonny, from the -son ending. Sonny is big in England right now. It struck me as odd when I first saw it inching up the popularity charts, but I heard it on a baby (in England) a few years ago, and it was pretty darling.

Overall, Emerson has a lot going for it. It’s a great name for a son – polished, fun to say, with plenty of appealing associations, and a very current feeling, too.

But let’s open this up to the community for some more opinions.

Readers, what do you think of Emerson as a boy’s name?