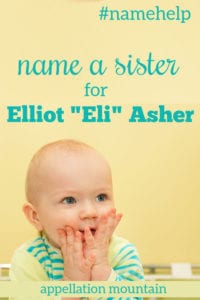 My husband and I really struggled to name our son two years ago. Now we’re expecting another baby in a month, and we’re just as stuck.

Our son is Elliot “Eli” Asher. We have a short last name that sounds like truck-with-a-K. I like the name a lot, but it felt like torture to get there. Everything I suggested was a no from my husband, but he didn’t really have any ideas of his own. Elliot was finally the name that he didn’t reject, but that was two days after he was born.

The one thing I regret about the name is spelling. I’m Sara-without-an-h, and he’s Elliot-with-one-t. I wanted to avoid that kind of thing, because it gets old fast. Maybe that’s why he ended up being Eli, but it suits him really well.

This time, we agreed not to bring up names until we had our twenty-week ultrasound, but I’ve been putting it off … and off and off. But now I’m imagining being in the hospital with another nameless baby and I just cannot.

At the same time, starting a list feels pointless, because I know my picky husband won’t like anything!  Help!

Congratulations on your daughter, and oh, I’m sorry you’re going through this!

As frustrating as your husband’s behavior must be, I want to give him a little grace. Choosing is hard, especially when it’s something we want to get right.

But choose we must, and I believe we make the best decisions when we start sooner rather than later.

So here’s the way forward.

If your husband doesn’t want to make a short list, that’s okay. But you can – and should! – start on a list of your own. (We’ll help!)

My suggestion: find a block of time when you and your husband can talk. (I know – easier said than done with a toddler!) Present your list, and make it clear that either your daughter’s name is on this list OR you’re going to have a conversation that results in a short list of possibilities you both like. Because it is unnecessarily stressful – at least to you – to not have this detail settled in advance.

Once you have the list – with or without his contributions – it’s not about crossing off names you don’t like. (Well, maybe a little bit of that is okay.) But it should be about picking out the names you both like best on the list.

Based on Elliot Asher, I’m guessing you’re drawn to names that feel current, but have traditional roots. The Sara/Elliot concern suggests we need a name with one clear and unambiguous spelling. And because your surname is short, we’re looking for something two syllables or more to balance everything out.

I keep coming back to this list of sweet spot names for girls, but options are plentiful.

If I were writing your short list, I’d start with these eight names:

Avery – It’s fairly popular, as is Ava. But it has a vowel-heavy sound that reminds me of Elliot, plus it’s straightforward to spell and pronounce.

Daphne – I feel like I suggest Daphne a lot, but I think it’s a good fit here. One spelling. And it’s unlikely to be shortened, right?

Georgia – Again, I think Georgia comes up pretty often on #namehelp lists, but that’s because of these qualities: easy to spell, not too popular, instantly familiar, easy to nickname or wear in full.

Lucy – Like Mary, Lucy is a straightforward girl name that’s been in use for ages. It’s simple and complete,

Maren – Like Elliot, there’s something surname-like about Maren. Though Maren actually evolved as a Scandi form of traditional feminine names. It’s more cousin to Karen than Madison. But I think it might hit the right note – easy to spell and familiar, but not invented.

Tessa – Strictly speaking, Tess is short for Theresa. But because many parents prefer nickname-proof choices – or names where the only nickname is obvious – Tessa now feels complete on its own.

Valerie – I think of Valerie as one of those not-quite-classic, but still solidly traditional choices for girls. It’s not as popular as chart-toppers like Evelyn, but it has much of the same appeal. If Avery strikes you as almost right, but a little too trendy, Valerie could be the perfect choice.

Willow – I love the sound of Elliot with Willow. They both share strong ‘o’ and ‘l’ sounds, and yet they feel quite distinct, too.

Overall, my favorites is Daphne, but I feel like Tessa might be closer to what you’re after.

I’m sure readers will have some great suggestions to add to your list. Please let us know how it goes!

Readers, what would you add to Sara’s list for a sister for Elliot “Eli” Asher? Any advice on working with a partner who tends to shoot down lots of names … but doesn’t make any suggestions? 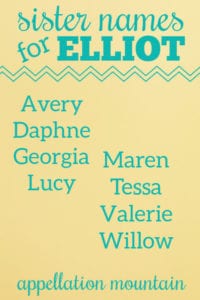