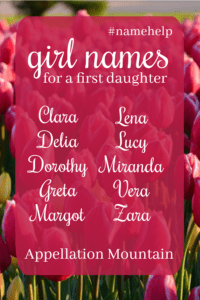 My husband and I are expecting our first child. We’re good to go if we have a boy, but are utterly stumped if we have a girl.

There just aren’t any names that I’m completely wild about. There ar e many that I like, but a lot of them have issues with either being too weird, don’t sound good with the rest of the name, a cousin already used the name, my husband doesn’t like it, etc.

The middle name will be Roselaine and the last name starts with S, ends with n, and is similar to Samson.

What we are trying to avoid:

We like old-fashioned names that are obviously female and not a nickname for another name. We like nicknames, but for example would name our child Elizabeth and call her Ellie rather than put Ellie on the birth certificate.

Wow, does all that rule out a lot!

Thank you, and I hope you can help!

Congratulations on expecting your first!

Here’s the good news: you know exactly what you’re looking for! Sometimes choosing a name is like shopping for a great pair of jeans. It’s easy to rule out dozens of options at just a glance, but finding the right fit requires a lot of effort.

That’s okay – we’ll try some on with you!

One note: I’m pretty sure you’re pronouncing Roselaine like Rose-Elaine, right? I read it as Rose-Laine at first. I’m not sure if you’re set on pronouncing it Rose-Elaine, but it strikes me that if you have any flexibility on this question, it might help expand your options slightly.

Clara – One thing you didn’t mention in your wish list: popularity. Clara currently ranks #99, and I think it’s likely to rise in the near future. (But that doesn’t mean she’ll be one of three in her class! It just means you might meet more Claras than, say, Gertrudes.) The hard C sound of Clara works nicely with the repeating ‘s’ sounds of Roselaine and like-Samson.

Delia – Delia doesn’t chart in the current Top 1000. Crazy, right? Adelaide does. And Delilah, plus more spellings of Adeline than I can list here. But Delia has been overlooked. (One caution: there’s a mournful Johnny Cash song about love gone wrong which puts a chilling spin on this name. It tends to come up whenever I mention this name, and yet, I have a hard time seeing it as a dealbreaker.)

Dorothy – When it comes to old-fashioned names that are slowly coming back into style, Dorothy strikes me as a can’t-miss pick. It has all the gumption of Kansas farm girl Dorothy Gale, a long list of accomplished real-world women by the name, and sweet nicknames galore. It re-entered the US Top 1000 in 2011, and had climbed to around #650 by 2016; I think it will be up again when we get the new list in May. The related boy’s name Theodore is white-hot, and Thea is leaping up the charts, too. So Dorothy seems like the right kind of compromise: instantly familiar, but not widely used.

Georgia – I suggest Georgia an awful lot, but I think it works nicely for your family. It sits in the 200s, a good place for a familiar-but-not-common name. Nicknames like Georgie and Gigi are options, but I know plenty of Georgias who use their name in full.

Greta, Margot – Margaret kept coming to mind, and I think it’s a good option. But maybe Greta or Margot, both originally Margaret short forms, works better? Or maybe Margaret is the right name. It’s (obviously!) nickname-rich, with choices like Maggie and Maisie, to name just a few. (Though Maisie might conflict with your surname.) Lastly, Margot’s silent ‘t’ trips some up, but it is, by far, the more popular spelling. Margo fails to make the current Top 1000; Margot is in the 400s.

Lena – Lena could be short for a longer name. (Helena, Magdalena … you get the idea!) But it stands nicely on its own, a brief but complete name. It has the sophistication of Sophia or Ava, but in terms of popularity, it’s more like Olive or Lyric.

Lucy – There’s something appealing about a shorter name, and I think an ends-in-y pick could work well. Lucy feels gently old-fashioned, and while it’s popular, it may not be in use among your friends and family yet. Like Mary, Ivy, and a handful of other ends-in-y names, it’s not a nickname. But you could potentially use a longer form if that appeals – Lucia and Lucille both come to mind. Lucy does contain the ‘s’ sound, but I think it’s subtle enough to work with the rest of the name.

Miranda – Miranda peaked back in the 1990s, but it never cracked the Top 50. The result? Everyone knows the name, but it doesn’t feel like the Jessica-Ashley-Brittanys that defined their generation. A literary name with a great meaning – wonderful – and some fun nickname options, like Miri and Andi, Miranda might belong on your list.

Vera – When I’m thinking of names with great meanings, Vera always comes to mind. Depending on your perspective, it can mean faith or truth – auspicious associations, both. Vera checks all the boxes: old-fashioned, not too common, generally familiar, easy to spell and pronounce.

Zara – Zara feels more modern than most of the names on this list, but I wonder if it might appeal to you? The downside: you might have to explain that it’s Zara, not Sarah. But I suspect Zara is just familiar enough to sidestep most problems.

I think narrowing the list comes down to two things: first, you mentioned you were open to names like Elizabeth-called-Elie. But do you want that kind of formal-name/nickname combination? If so, Margaret and Dorothy are your best bets from this list, and I’m partial to Dorothy Roselaine (like) Samson.

Readers, over to you! What would you suggest for a girls’ name that goes with Roselaine (like) Samson.