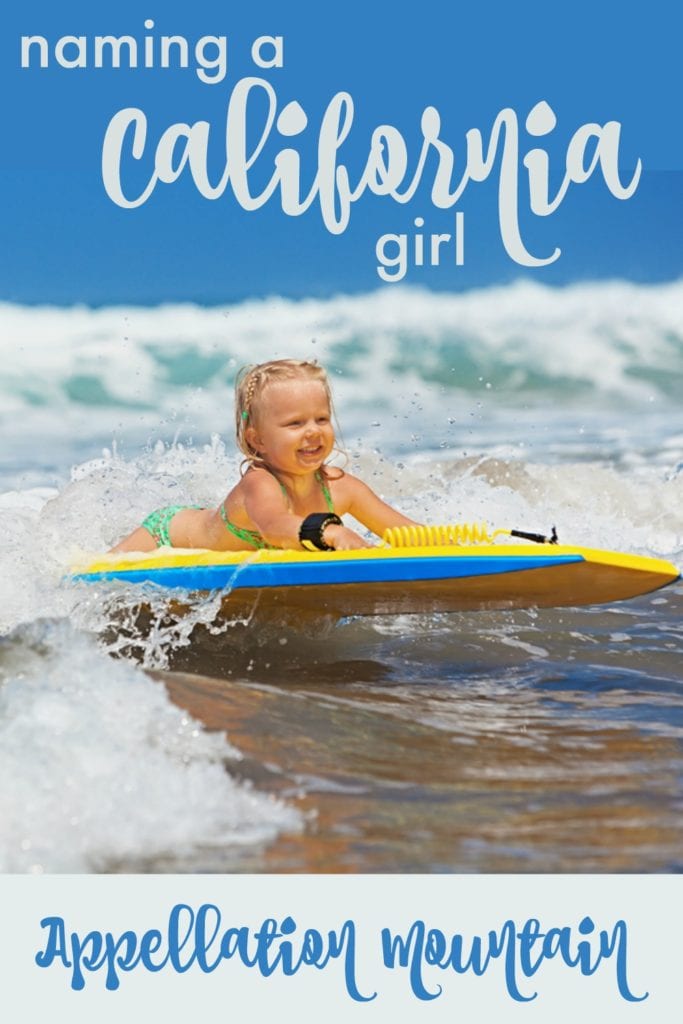 My husband and I are both from California. This is a little rare because everyone in California seems to be from elsewhere!

We love the state because you can sail, ski, surf, or whatever in the same day if you wanted! We were married outside of Napa.

Our firstborn little girl is named Callie Briar. Callie for California and Briar because it was adorable and maybe a little magical, like Briar Rose.

We named Callie’s baby brother Sutter Thomas. Sutter’s Fort was the scene of the Bear Flag Revolt, where California earned its independence from Mexico, and Thomas after my father.

Now we are due with #3, a baby girl. Her name will be Whitney, named after Mt. Whitney, the tallest mount in the contiguous US. But we are stuck on a middle.

Oh, you’ve done a marvelous job finding naming your children to celebrate your home state! It’s subtle, creative, and meaningful, too. So much that I’m not sure you need our help at all. 🙂

From the names you’re currently considering, my favorite is – far and away – Luna. Here’s why:

That said, all the choices on your list are equally appealing, which makes it really tough to weigh in on this one.

Let’s have a poll:

And, just for fun, let’s see if we can think of a few other options, too.

Marin – If you were looking for a double dose of California baby name, I think Marin works beautifully. There are two stories about how Marin County was named. The first tells that a local tribal chieftain took Marin or Marino as his baptismal name when he converted around the age of 20; the county was named for him. Others claim it comes from the Spanish name of a local bay, Bahia de Nuestra Señora del Rosario la Marinera. Either way, it’s a quintessentially Californian choice.

Avalon – For Avalon Bay, as well as the city on Santa Catalina island. The name originally comes from Arthurian legend, and probably comes from a word meaning apple or apple tree. There’s lots more to this name, and the fact that it’s a California place name is a bonus.

Poppy – Okay, Whitney Poppy doesn’t quite work. But it’s worth considering for a future daughter, since it’s the state flower of California.

Oriana – Oriana comes from the Latin word aurum – gold – probably via the Spanish oro. Blue and gold are the state’s official colors; gold was named state’s mineral emblem in 1965; and, perhaps most importantly, the California Gold Rush shaped the state’s history.

Of course, since you’re not looking for a California-specific middle, possibilities abound. And I know there will be some great suggestions in the comments.

As for whether Rae is too country, I know what you mean. It sounds like it’s meant to be a double name, something like Daisy Mae or Billie Rae. But lately my thinking on Rae is this: Rey, from Star Wars fame, is set to be one of the most memorable heroines of the age. It changes my perception of the name dramatically, and makes it seem sleek, powerful, modern – no matter which spelling you choose. Which doesn’t help you narrow things down, but it might take Rae from your favorite-with-hesitations to your go-to middle name choice.