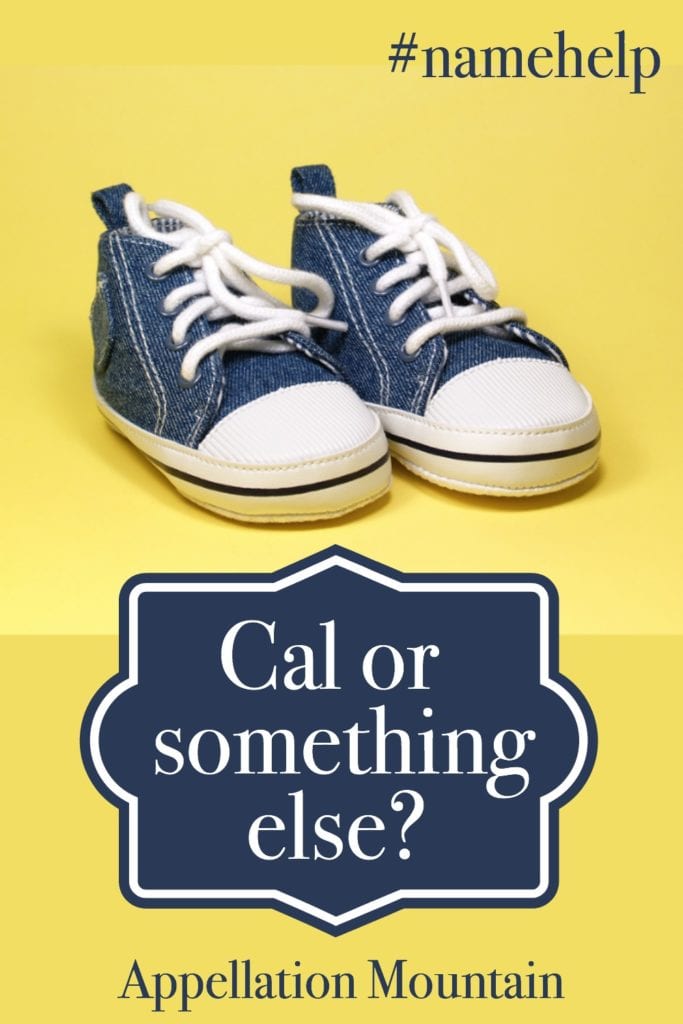 Samantha writes:
I’m almost 7 months pregnant with my first baby – a boy – and feeling pretty stuck.
We had originally agreed on Owen Wilder, but that doesn’t seem to feel quite right anymore. I like Owen, but it doesn’t feel like this baby’s name and my boyfriend isn’t crazy about it.
I like names that are in that sweet spot of “familiar, but not trendy; uncommon, but not weird.”
Silas, Calvin, Everett, Conrad, and Leo are a few of my favorites. I also really love Crosby (a name found in an ancestor’s journal) and Mercer, a play on my mom’s maiden name – Merchant. My boyfriend prefers trendier surname first names: Tanner, Logan, Mason, Carter, etc.
We both like Noah, but we can’t use it. And we like Cal, but want something longer on the birth certificate – but what?
The baby’s surname will be Crumb. Any advice from you and followers would be SO appreciated.

Please read on for my reply, and leave your helpful suggestions in the comments.

Congratulations on your first baby!

Usually I like to write about the name question in general before getting to specific name suggestions. But this time? Calder! I can hear the final piece click into place when I think about Calder for your son’s name.

It gets to the nickname Cal; has the same feel as Carter/Tanner from his list and Mercer from yours. Plus, you’ve already agreed on Wilder. So Calder seems like exactly the kind of name that would please you both.

But let’s say I’m wrong, and you’re already shaking your head “no” as you read this. What then?

I wrote a list of formal names for Cal a few years ago. I wonder if Callahan might appeal? It’s another surname name, like your boyfriend’s favorites. And it leads directly to Cal, which you both agree on.

Moving away from Cal names, it seems like you both agree on surname names in general; just not one surname name in particular.

If you would agree to stick with that style, do you think your boyfriend might consider some names that are less popular?

Archer – Archer sits just inside the current Top 300. I think that’s the definition of a sweet spot name!

Bennett – Bennett remains outside of the Top 100 – for now. It combines the appeal of a traditional choice (Ben) with the surname style of so many rising choices. This makes it a good possible compromise pick for lots of families, including (maybe!) yours.

Grady – I love the sound of Crosby, but I can’t decide if Crosby Crumb is too much repeating ‘cr’ sound. Given the connection to your family history, I’d still strongly consider Crosby. But if it ends up crossed off the list, Grady might make a good substitute.

Miles – Depending on your circle of friends, Miles might feel a little too popular. But it takes the ‘s’ ending sound of Silas and nudges it a little more towards the surname style your boyfriend prefers. Of course, Miles has been used as a surname and given name for generations, so this falls more on your side of the style line than his.

Thatcher – Thatcher makes a great surname name in the key of Carter. Only it’s much less popular than Carter and Parker and other Top 100 favorites.

Walton – Walton fails to crack the current US Top 1000, so maybe it’s a little too out there for you! But I think it’s the perfect stands-out/fits-in name. If names like Walker and Weston are on-trend, why not Walton? You might still think of long-time television series The Waltons, but it’s a reference that few children born in 2017 will recognize.

Does that feel like the right direction? If you’re on board with a surname name, it feels like one of these – or something similar – might create a good compromise between you and your boyfriend.

Readers, what would you suggest to Samantha and her boyfriend for their son? And what’s your favorite formal name for Cal?