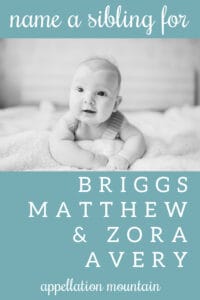 You helped us name our first, Briggs Matthew, back in 2017. We love his name!

I wish we’d reached out to you when we were naming our daughter. We were down to Navy or Zora until we had to choose, and we finally chose Zora Avery. It fits her, and we love it now, but I spent the first few weeks convinced we’d made a mistake.

This new baby will complete our family. We plan to find out what we’re having in a few more weeks, but want to start thinking about names now.

My big worry has always been that our last name is very common as a last name and a first name: T@yl0r.

You gave us good advice to skip Brayden. (Just like you predicted, we hear Aiden/Jayden a lot, and while we still love Brayden, it probably would have ruined it for me.)

People do call Zora lots of other names. Zara, sometimes, and Nora. But mostly we think it’s the kind of name that people “get,” even if it takes a few tries.

So that’s what we want again: a name that people “get,” that isn’t super common, and we want to have it settled way before we’re in the hospital!

Here are the questions for this baby:

And that’s what we’ve got. Can you help us with some new ideas?

You’ve done a good job of finding first names that feel distinctive, but not too out-there. No guarantees that your kids will be the only Briggs or Zora T@yl0r, but they (probably) won’t be one of three.

The first question, I think, is whether you want to stick with the B/Z theme for future children?

I’m going to assume the answer is no, because a) your maybe list isn’t focused on those letters; b) you didn’t plan it to begin with; and c) it’s fun, but it’s a pretty invisible pattern.

Since there aren’t any middle names under consideration, maybe you could hand down Brianna/Bree/Brynn or Zachary/Zachariah/Zakai or something similar? Or even Brian/Bryce for a son?

I tend to agree with you about Declan, Everett, and Hudson – great names, all. But yes, they’re all ranked in or near the current US Top 100. Could you use them? Of course! But they’re not quite what you’re looking for, right?

If you do want to stick with another B name, would Boden appeal? Yes, it’s a colorful British clothing brand, but it comes from the founder’s surname. And with that bright Bo sound, it’s a name with plenty of energy to match brother Briggs.

Maybe this is more of a match for Zora than Briggs, but Cassian is one of those ancient names that feels modern. It’s pronounced Cash-ehn, rhymes with passion and fashion. It’s the name of a character in the extended Star Wars universe – one who is about to get a television series – so we could hear more of it in the future. But it feels like a solid Sebastian alternative.

A surname with Irish roots and an appealing meaning: proud.

Gatlin means kinsman. It’s a surname with a long history of use; Gatlinburg, Tennessee got its name from the family who owned the local general store. Full disclosure: Gatling is a related surname, and inventor Richard Gatling gave his name to a gun.

A nature name that would be big today … except it had a good run in the late 1960s through the 1970s, thanks to television western The Big Valley. Still, it barely cracked the US Top 200, so it’s not exactly Jason or Scott.

I suppose an obvious surname name might be too much with your last name? Except that Jones is so many things that you like with Briggs – familiar, but not common. Upbeat and energetic. Then again, maybe it’s too much like Briggs?

A straight-up nature name, not currently in the US Top 1000, but accessible and strong.

A surname with Welsh roots, there’s something smooth and polished about Vaughn.

An obscure name with Hebrew roots, Amaris might be a lot like Zora – it takes a minute to get it, but the effort is worthwhile.

Like Zora, Cleo is a vintage name with a modern sensibility.

We love Emma and Ella, so why not Etta? Originally short for longer names like Henrietta, today it stands on its own.

You might choose Gwendolyn or even Guinevere, but I think just Gwen is a great match with Zora and Briggs.

An invented name with a great meaningful – cheerful, from the same root as our word jovial.

As vintage as Zora, but with an extra syllable. Luella has a lot of spirit.

A smooth surname name that also brings to mind midcentury nickname-name Marlo, this sounds just right with Briggs and Zora to me.

A little more traditional than most of the names on this list, but with plenty of style, too.

A SIBLING FOR BRIGGS and ZORA

I’m a little bit stumped! While I can argue why lots of these names make sense, it’s really tough to narrow down the boys’ list, isn’t it? Sound-wise, I keep going back to Gatlin, but I worry about the associations. I think my favorite is Dempsey, particularly because it gives every sibling their own ending sound.

For girls, it feels easier. Cleo, Marlowe, Jovie, Gwen, Etta … pretty much every name I’ve suggested has felt like The One at some point while I’ve been writing this reply.

Of course, I’ve skipped over your thought about Winter. I agree, it’s not great with your surname. But maybe another, more subtle nod to the season, like Sylvie or Neve?

Okay, over to you! Readers, what would you suggest for Briggs Matthew and Zora Avery’s new sibling?