I am pregnant with my third and my husband and I are really struggling to pick a name for our little guy.

Our other two children are Jack Edward and Julia Reese. We are not
necessarily trying to keep with the Js, but the names we have been
thinking are Jude, Judah, Hudson, and Isaiah.

The middle name we have picked is Palmer and our last name is like Williams.

We really like the Biblical meanings of Jude , Judah and Isaiah. Hudson is probably our least favorite because of the meaning.

We have had Jude picked out since our first was born but we felt it was a boy name. I do not
really like that it has become so gender neutral.

My husband really wants to use Isaiah because of what that book of the Bible has meant
to him. I feel that Isaiah may not fit with our older kids’ names. Judah just does not have the same kind of appeal to me that Jude, Hudson, and Isaiah have.

Please read on for my answer, and share your helpful thoughts and suggestions in the comments! 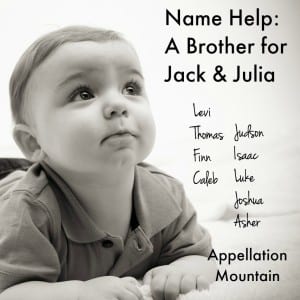 Congratulations on your baby-on-the-way! I know what you mean about loving J names. J is the most popular letter for boy names, and second most popular for all names overall. There’s just no shortage of great possibilities starting with J.

It sounds like your ideal name will have all (or at least most!) of these qualities:

I’m tempted to encourage you to use Jude. While there were 113 girls named Jude in 2014, the usage for this name is overwhelmingly masculine – 2,564 boys were given the name. Jude is straightforward, classic-but-current, and there’s the New Testament Jude the Apostle.

Except that Jack, Julia, and Jude feels like a theme, and if you should ever welcome a fourth child, well … I find it hard to imagine not using a J name after three in a row. Plus, Jack and Jude are close, and Julia and Jude share their first sound. So maybe Jude is a little bit too close to consider.

It sounds like Isaiah is a name that speaks to your husband, but just doesn’t feel right to you. Normally, I’d suggest you use Isaiah as a middle. Is that still an option, or is it important to keep Palmer?

Let’s look at some other options:

From your list, I love Jude, but worry that it’s too close to your older kids’ names. I think Luke is my next favorite for you – both Luke Palmer and Luke Isaiah sound great. Levi and Caleb feel like good fits, too, especially Levi with his meaning. Levi Palmer, Levi Isaiah.

Readers, now it’s your turn. What names would you suggest for a brother for Jack and Julia?