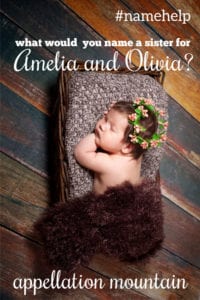 We are expecting our third daughter, a sister for Amelia Anne and Olivia Grace. Our boy name for years has been Ethan, after my husband’s late brother. This is almost certainly our last child, so if there was a girl version of Ethan, I’d consider it. But there’s just not. And we love our girls’ names, and don’t want something different, so we’re not that family who would name a daughter Ethan.

But it is also hard to find a name that’s not too much like Amelia and Olivia. We almost agreed on Penelope, but good friends just gave that name to their daughter, and I think there would be hard feelings. We like long girl names, mostly ending with a, but we’re not sure what goes with Amelia and Olivia without being too similar?

Here’s the good news: you know your style, and you know what you like. Amelia and Olivia are feminine, traditional in style, and currently quite stylish.

The dilemma, of course, is that so many names might be ruled out because they’re too close to Olivia and Amelia. Emilia is a no, of course. And maybe some others.

But if you like the long and lovely sound of such names, then I wouldn’t try too hard to escape it. It’s a question of finding a name with a sound that’s just distinctive enough to work with Olivia and Amelia.

Alessia – Alexa is everybody’s go-to digital assistant, and Alexia isn’t too different. But Alessia is her Italian cousin, and I think it works. Pop singer Alessia Cara has made the name more familiar, but it’s still #580.

Elena – Would an E name be enough to honor Ethan? It’s subtle, but it’s something to consider. A romance language cousin to Helen, Elena is three-syllables, ends with a, and yet sounds different compared to Olivia and Amelia. Elena ranks #66.

Eliza – If not Elena, how about Eliza? Originally short for Elizabeth, it’s long been perceived as an independent name. Hamilton has given the name a boost, but it was already catching on. Eliza ranks #131.

Georgia – Georgia is just a little shorter than Amelia and Olivia, but I think it still works perfectly. There’s something upbeat and spunky about this name. Everybody seems to love it, but it’s just #223 – which always surprises me!

Lucia – I’m saying it loo-see-uh, three syllables just like your older girls’ names, but it’s worth noting that some will say it with two: loo-sha. The Latin name comes from lux – light. It ranks #183.

Rosalie – Since Penelope ends with the ‘ee’ sound, I wonder if Rosalie might appeal? It’s feminine and traditional, but a little different. Rosalie ranks #208. It’s the French form of Rosalia, which might meet your criteria better on paper – but I think it’s Rosalie that feels more like a sister for Olivia and Amelia.

Sienna – Unlike Olivia and Amelia, you won’t find a Sienna in 1889 or 1919. But it doesn’t feel invented, probably because there’s the Italian city of Siena, and Saint Catherine of Siena. The double ‘n’ spelling is far more popular as a given name, possibly because it’s how we spell the orangey-red color, which puts Sienna in the same category as Ruby and Scarlett. It ranks #186.

Valentina – It strikes me that you use Olivia and Amelia in full. That makes me think of Valentina, another name that qualifies and long and lovely. Valentina ranks #81.

One other thought: would you consider the middle name Eden? it’s not related to Ethan, but the sound is similar.

My favorite combination is Eliza Eden. I think Olivia, Amelia, and Eliza work perfectly together. They’re all elaborate, feminine names with a endings. And Eden seems like a great middle name nod to Ethan.

Readers, over to you. What would you name a sister for Olivia and Amelia? And have I missed any ways to honor Ethan for a girl?