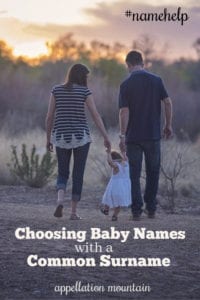 My husband and I are expecting our first baby this summer. We just found out it’s a girl. I’m excited about almost everything, except that choosing a name feels so hard, because our last name is Smith.

My maiden name was almost as common. And my husband’s first name is Mike. There are, literally, thousands of Mike Smiths, and nearly as many Heather Smiths, and probably hundreds of Mike and Heather Smiths. He works for a huge company, and there’s more than one Michael Smith there. (Though not in his actual office.)

I don’t really like different names, and I’m not a big fan of nicknames. (Other than obvious ones, like Mike for Michael.) But if we use the names I like best – Olivia, Eliza, or Amelia – she’s going to be one in a crowd.

We often hear from families worried their surname is so complicated that they’re limited in their first name choices. It’s good to remember that the opposite can also be true. There must be dozens of girls born every year with a name like Emma Rose Smith or Ella Grace Smith. (Incidentally, the site How Many of Me? estimates there are around 4,800 Heather Smiths in the US. That’s a big number!)

But you do have some good options:

The question is which path feels most satisfying. Since the names you love tend towards the more popular, I’m tempted to suggest the second – some truly bold middles. (Think Amelia Primrose. Olivia Seraphina. Eliza Delphine.)

Except, I wonder if that leaves you with a first-last name combination that might frustrate. So let’s see if we can find an uncommon first that isn’t really all that unusual.

Cordelia – Literary and lovely, Cordelia was the name Anne of Green Gables wanted for her own. With years of history, everyone recognizes Cordelia. And yet, the name teeters on the edge of the Top 1000, meaning it will seldom be shared. It’s as long and lovely as Olivia and Amelia, and if you planned to use those without nicknames, then Cordelia could wear every bit as well.

Helena – The downside to Helena: I can count at least three possible pronunciations. The upside? It’s an uncommon name that feels instantly recognizable. Tailored Helen sidesteps the pronunciation issue, but since that name has previously appeared near the top of the popularity charts, perhaps it’s too common? (Though the name peaked about a century ago.) In any case, Helena has the same feminine, but traditional, appeal as the other names on your list.

Larissa – Larissa peaked in use in the 1990s, the heir to Melissa, Alyssa, and Marissa. Except it never really caught on in big numbers, plateauing in the mid-300s. That means it feels just different enough today, while still being broadly recognized as a girls’ given name. It’s as feminine and flowing as your current favorites.

Marielle – Or Mariel, though American parents favor Arielle, Juliette, and Annabelle these days, which could make Marielle the default spelling. Strictly speaking, Marielle is a form of Marie. But I suspect most parents will just hear it as pretty and surprising.

Matilda – There’s something quirky and cool about Matilda, and it’s rising in use – but it’s still far from common.

Tabitha – We all recognize Biblical Tabitha as a girls’ given name, but it’s not even in the current Top 1000.

Now, having said all that, I do want to point out something about your three favorite names. Olivia is a long-time Top Ten. Amelia sits near the top of the charts, too, with sound-alike Emilia also in the Top 100. But Eliza? Eliza does not make the current Top 100. I’d agree that Eliza Smith is a fairly common combination. But a name like Eliza Marielle Smith might stay just on the right side of too familiar.

Or maybe there’s some great family name that might work in the middle? I know someone with a very common first-last combination, and a wildly unusual family surname that she tends to use most of the time. (I suspect because it’s the only way she stands out from others who share her name, though I’ve never asked.)

So while I’d love to hear more ideas for familiar-but-seldom-heard girls’ names to substitute for Olivia, Amelia, and Eliza, I’m also thinking that Eliza might be exactly the right choice, especially with a bolder, less expected middle.

Readers, what would you suggest to Heather and her husband? Do you have any thoughts on working with a common surname?