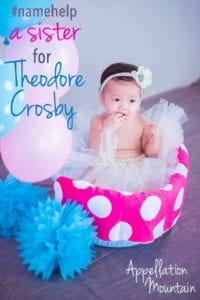 We are having a baby girl in a few months, and we have a 3 year old son named Theodore Crosby. Mostly we call him Theo, but we like the longer version too.

My husband is Greek, so we like that it has some Greek flavor. Crosby is kinda quirky and fun which is my style. I am Piper Peggy Star- I was the only Piper until I was 25 and it became trendy. I can’t say I liked having such a unique name as a child.

For our daughter we want something equivalent to our son’s name: not terribly common, but kind of classic as a first name, and a more risky middle name.

We like Serafina a lot but are a bit worried it might get super popular. We are fine with it not being obscure but we know six Sophias and there are three Lunas in my son’s class so we hope to avoid that level of trendy.

I think Serafina is our front runner. We could call her Sera, which around here doesn’t seem common like it was. Serafina Daphne, Serafina Star (after me a little), Serafina Bell, maybe? We do like feminine names.

Our last name is long and Greek, and quite a mouthful on its own so we worry that with a long first and middle name, it will just be too much.

We would love any thoughts or new names to consider.

I’m always curious about how it feels to have a really rare name that becomes a really popular name. It sounds like you’re trying to avoid either extreme for your children, and that makes sense.

Most of the time, we can trace a gradual increase in use. Take your name. There’s no comparable supernova for Piper. It’s been used in small numbers since the 1950s (thank you, Piper Laurie) and gained significantly in recent years. But that’s very different from the kind of increases associated with the rare, wildly trendy name like Miley.

One factor that makes tracing name use challenging: spelling. When a name can be spelled multiple ways, it might seem even more popular than the numbers suggest. Sophia/Sofia demonstrates this. Over 16,000 girls were named Sophia in 2016; but factor in the 9,100 Sofias and this name rockets past Emma to claim the #1 spot in the US.

Let’s take a look at the numbers for your favorite name, Serafina.

In 2016, 117 girls were named Serafina. It’s been given to more than 100 girls every year since 2011, and it’s been in use throughout the twentieth century. Seraphina, the name of Jennifer Garner and Ben Affleck’s middle child, is more popular, with 209 births recorded in 2016. But again, there’s a long and steady increase in use, from 88 in 2009 when Miss Affleck arrived.

Combined, that puts this name just inside the current US Top 1000. But barely. Barring a wildly popular fictional character in a hit television series or movie, it’s hard to imagine either spelling reaching the Top 100 anytime soon.

There is a bestselling novel called Serafina and the Black Cloak, the start of a YA series from author Robert Beatty. I’ve yet to read it, but it’s the start of a trilogy, and it could possibly become a movie. Or not. It’s not enough to suggest this name is the new Isabella.

Give it twenty years and, as you know from personal experience, anything is possible. But as of today, Serafina seems safely under-the-radar.

Let’s take a look at the popularity of your other favorite names:

You’ve also mentioned preferring “kind of classic” names. That’s a tough line to draw, but I’d say that Daphne, Analise, Celeste, Iris, and Athena all make the cut. Sidney and Henley strike me as much more modern, especially for a daughter.

Since popularity factors into your decision, Daphne and Celeste feel like the better picks. Not that Athena or Iris feels too popular at all – but they’re certainly more common than the others.

Of course, Daphne and Athena clearly share Greek roots, while Celeste is Latin. (Serafina also claims Latin origins, though perhaps it’s used enough in modern-day Greece that it feels acceptable.) Iris, on the other hand, is Greek in origin. And yet, I wonder if it feels like less of a heritage choice and more of a vintage nature name.

One other note: Theodore recently re-entered the US Top 100. I think it still feels pleasingly distinctive compared to so many two-syllable, ends-with-n boy names. And no question Theodore belongs with the classics. Still, maybe Iris and Athena should be included, since they’re more popular than Serafina, Celeste, and Daphne – but overall, still beyond the benchmark of Theodore.

Calliope – Calliope shares the ‘e’ ending of Daphne, but has a more elaborate sound reminiscent of Serafina. I’ve heard it’s used in modern Greece, though I’m not clear if that makes this name dated or current by 2017 standards.

Eleni – Eleni makes for an interesting choice. It looks and feels a little bit modern, maybe even invented. But it’s the modern Greek form of Helen, and very well-used in Greece today. Eleni fails to chart in the US Top 1000, though I’ve met few in the US. It seems like a great heritage pick with a lot of energy and style, too.

Lucia – I can’t find a satisfying Greek equivalent of Luke and company. And it’s a tangled web, with some Luc/Luk names related to the Latin lux, light, and others coming from a Greek place name. Still, given Lucia’s pan-European style, it feels like a fit. Lucia ranks #213 and sounds like a sister for Theodore.

Selena – Selena comes from the Greek goddess of the moon. It ranks #285 in the US at present. It shares the same general sounds as Serafina, but is slightly shorter.

Thalia – Thalia appears throughout Greek myth, and it feels like the kind of name that would wear well in 2017 and beyond. The big challenge? Spelling and pronunciation, of course. Is the ‘h’ silent, like Theresa? Or pronounced, as in Thea? Plus, Thalia ranks #809, while Talia comes in at #307. Theo and Thalia – pronounced ‘th’ – might be a tongue-twister, but I like Theo and Thalia – silent ‘h’ – quite a bit.

Valentina – In terms of sound and style, Valentina reminds me of Serafina. Once again, it’s Latin rather than Greek. It comes in at #106, which makes it more familiar – but possibly too popular.

A Sister for Theodore Crosby: Recommendations

My top suggestion is Daphne Serafina, for three reasons. First, you’ve mentioned that your surname is long, so Serafina might make for a mouthful. Second, Sera lacks the instant familiarity of Theo. I think you’d face some confusion explaining that it’s Sera, short for Serafina, rather than Sarah or Sara. For many families, this is no reason to avoid a name – but it sounds like you’d prefer something more straightforward. Lastly, I think Daphne and Theo/Daphne and Theodore are very well matched as sibling names, with a strong hint of Greek heritage while still feeling very familiar in the US.

My second choice is Eleni Serafina. Yes, it’s much less familiar than many names on this list. But it’s a great heritage name that has a modern, on-trend sound. I think it splits the difference between names like Sidney/Henley and more traditional choices.

But lastly, I really do like Serafina, particularly with Star as a middle name from your full name. Serafina Star probably skews a little more unusual than you’d like. And yet, I don’t know if that’s a dealbreaker. It’s just worth asking yourself if finding something that fits in is more important than using a name you really love. There’s no right answer to that question, but since it might help to have some opinions, I’ll add a poll at the bottom.

Readers, what should they name Theodore Crosby’s sister?