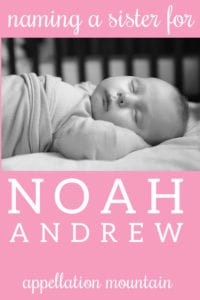 We have a five year old son named Noah Andrew, and I’m pregnant with a daughter due the first week of December.

Deciding on Noah’s name was easy. But this time, it feels like the girls’ names we liked are too popular. Emma was my favorite if Noah was a girl, but we know three little Emmas, including our neighbor’s new baby.

Also, even if Emma was still on the table, Noah and Emma sound maybe a little too cute together. We like Biblical names, but does Noah and Leah seem a little too much?

Our last name is long and complicated, so we like easy first names.

For so many reasons, naming is one of the few things that gets harder as we become more experienced parents. The choices we make for one child do tend to rule out possibilities for future siblings – or at least make us hear them in different ways.

Let’s start with the big picture: I don’t think Noah and Leah is too much Old Testament. They’re both well-established names with a long history of use. If you were thinking of, say, Nehemiah and Miriam, maybe, that would feel a little more obvious.

As for the sing-songy part? I think it’s a hazard, but I wouldn’t say it rules out every two-syllable, ends-with-a name for a daughter. Noah and Emma sound a little close because the n/m sounds are similar. But I don’t find Noah and Leah too close at all. Or … Noah and Sarah, Noah and Ava, Noah and Ella …

But let’s move on to the names.

A SISTER FOR NOAH

We need a girl’s name that is short, easy to spell and pronounce, reasonably familiar – and perhaps relatively popular, too.

I’m going to skip -a enders – though there are so many gorgeous options! Because really, if you don’t mind the shared -a ending, I think Noah and Leah are perfection together.

That’s a big pool of names, but here are a few that I think work really well:

Visually, Audrey is a little long. But it’s really quite straightforward – two syllables, easily spelled and pronounced, familiar to all thanks to the legendary Audrey Hepburn.

Spare and classic Claire seems like an obvious choice to match with a longer surname.

Completely unknown in the US until later in the twentieth century, Eden feels modern – and yet deeply rooted in tradition.

Maybe it’s too obvious of a substitute for Emma, but that’s also why it’s worth a mention.

As slim as Claire, as meaning-rich as many a longer name.

Sweetly vintage, but with history galore, Lucy is completely different from Noah – but nicely compatible, too.

Molly started out as a nickname for Mary, but it’s long worked as an independent name with plenty of spirit.

Musical surname name Piper isn’t traditional, but somehow it feels like a match for brother Noah, especially with a more traditional middle.

A big favorite in the 1980s and 90s, it’s easy to forget that Rachel really is a classic choice for a daughter. It’s Biblical, but the sound is distinct from Noah – which makes them nicely compatible.

A frills-free name for a daughter that feels feminine and sleek, traditional and modern. Vivian is a little on the long side, but it might be exactly what you’re after.

I’m all about Lucy and Noah together – it was one of my first thoughts. Lucy Claire, maybe, or Lucy Katherine?

Now readers, over to you – what would you suggest as a sister for Noah Andrew?