My husband and I have a baby name dilemma. We are due in August with a second daughter.

Lila was a name we always loved. It is feminine, flirty, and old-fashioned. On a trip to Rome, we met an Italian woman with the most beautiful puppy, and she told us the dog’s name was Lila. Even though we weren’t yet married, we looked at one another and took that as our sign that if we ever had a daughter … her name would be Lila – even though it was a puppy. Ha!

James toughened up Lila. We appreciate all of the Biblical associations of James, and we both adore the song “Sweet Baby James” by James Taylor. We did it first, Blake Lively! 🙂

We live in the heart of the South. While Lila James isn’t truly a double name, we do call her both names quite frequently.

We knew a son would be Rhodes Joseph. We had no ideas for a second daughter, and we do not seem any closer to nailing anything down.

We live in the South, and the monogram shops are calling my name!

We are leaning towards Josephine as a middle name. My husband’s middle name is Joseph, and I am madly in love with the guy. I really think it will be special for a daughter to be named after him.

For first names, our favorites are Violette, Marybelle (nickname Belle), with Juliette (but will she be called Julie?), and Dahlia. I love the names Molly, Marlowe, and Margaux, but they don’t work with our last name, which sounds like Marlborough. I also love Lola and Isla, but they’re WAY too close to Lila!

I am starting to think that if one of these names were “IT” we would have committed by now.

Our only requirement is that the name not be too common.

We would so appreciate any suggestions! 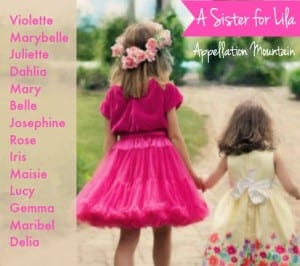 Congratulations on your second daughter! I know exactly what you mean about having one just-right boy name and one just-right girl name. We had a bunch of maybe-kinda-sorta names, but if our second child had been another boy? We might still be calling him Kiddo.

Lila James is all kind of fabulous, and hits just that right note of Southern femininity and 21st century edge.

Let’s talk about your favorites first:

Moving on to your not-quite-so-favorites:

So if popularity trumps all, it’s an easy decision – Marybelle. Lila and Belle sound great together, too. Dahlia is an easy second, followed by Juliette and Violette, in that order.

They’re all great names, but that’s the rundown based on popularity.

Then again, maybe it’s worth considering another first name entirely:

Then again, I’m still stuck on Marybelle and Dahlia, and that leads me to two last ideas:

Overall, I share your affection for Belle, and I do think it’s just different enough that it would stand out from all those Isabellas. While I’m usually all about formal names, in this case, I’m most drawn to Belle Josephine, followed by Iris Josephine, Gemma Josephine, and Dahlia Josephine.

But I do think you have a lot of great options here, and I know the readers will have more great suggestions.

What would you suggest for Lila James’ little sister?