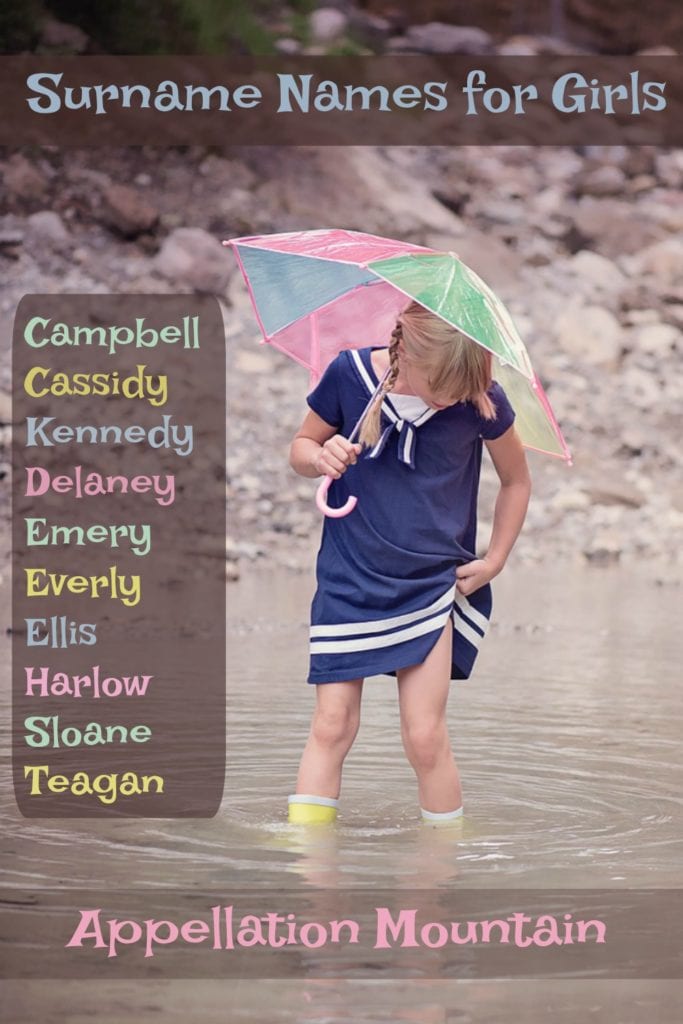 Brandy writes:
What would you name a sister for Kinley Olivia and Aubree Elizabeth? My husband and I aren’t coming up with names that stick!
For the first two girls I wanted a first name that would be considered modern, and I wanted their middle names to be classic. Now, we just want a name that will sound like a sibling of the other two girls. We really appreciate your help!
Please read on for my response, and leave your thoughtful suggestions in the comments.
Dear Brandy –
Congratulations on your third daughter!
I think a modern first with a classic middles makes for a good naming strategy.
And yet, I can see why naming a third daughter feels challenging. Kinley and Aubree sound very similar – they’re both surname names, two syllables, ending in the ‘ee’ sound. Both also share a certain nickname-proof quality. They’re likely to be called Kinley and Aubree most of the time, right?
Continuing the pattern works, of course. Hadley, Paisley, Colby, Riley, Darcy, Darby, and Marley fit. So might non-surname choices like Zoe, Chloe, or Sadie.
At the same time, some choices are ruled out. Naming Kinley’s sister Finley feels off, and maybe even Quinn comes too close.
Let’s focus on names that break some part of your established pattern.

Campbell – Campbell just crosses the line to feminine thanks to that -bell ending. There’s also journalism Campbell Brown – born Alma Dale Campbell Brown.
Cassidy – One option is to choose a three-syllable surname name. Cassidy peaked in the 1980s, but seems still approachable in 2017. Or, if Cassidy feels too dated, Kennedy might be another option. Though some parents prefer to avoid repeating first initials.
Delaney – No one named their daughters Delaney until the 1990s. Now it’s been floating around the Top 250, give or take, for twenty years. That makes Delaney modern, but not fleeting or trendy. It feels like a solid choice for Kinley and Aubree’s sister.
Everly – Everly makes an appealing name for Kinley and Aubree’s sister. But it is too popular? In 2011, it failed to crack the US Top 1000. Today it stands just outside of the current Top 100. And yet, with a great sound and the right modern style, Everly belongs on your list. If that popularity curve puts you off, another option might be Emery, which is rising quickly for girls, but not quite as dramatically.
Ellis – Ends with ‘s’ names could work nicely, too. Ellis often makes the girls’ lists because of that Ell- first syllable. (Though it remains much more popular for boys.) Other options include Hollis, Hayes, and Reese.
Harlow – O ending girl names have gone mainstream, with choices like Willow and Margot catching on. Harlow brings to mind Hollywood legend Jean Harlow. It’s gained steadily in use since Nicole Richie and Joel Madden welcomed Harlow Winter Kate in 2008.
Sloane – Most of the names I’m suggesting might be called unisex, but skew feminine in usage. Sloane fits this description. Ever since Ferris Bueller took his famous day off with gorgeous – and kind – girlfriend Sloane Peterson, it’s been in parents’ minds as feminine. Credit Princess Diana and Entourage for reinforcing that image. Today it stands just outside the current Top 250.
Teagan – Here’s a thought: transfer that long ‘ee’ sound to a different part of the name. Teagan shares sounds with Kinley and Aubree but seems different and distinctive, too. When it comes to two-syllable, ends-with-n names, I’d tread lightly. Some picks – like Dylan, for example – are used for girls, but I’d expect Dylan to be Kinley and Aubree’s brother. Teagan ranks far higher for girls than boys, which makes it a better fit.
I’ll admit that I like almost every name on this list. Teagan might be my favorite – but I think that’s simply because it’s the final entry!
While I find names like Hadley tremendously appealing, too, I’d encourage you to consider breaking the two-syllable, ends-in-y pattern. Maybe that’s because I grew up with two sisters, all of us sharing two-syllable, ends-in-y names. It felt a little sing-songy. Besides, options for just slightly different names abound!
Readers, what would you suggest to Brandy for daughter #3?