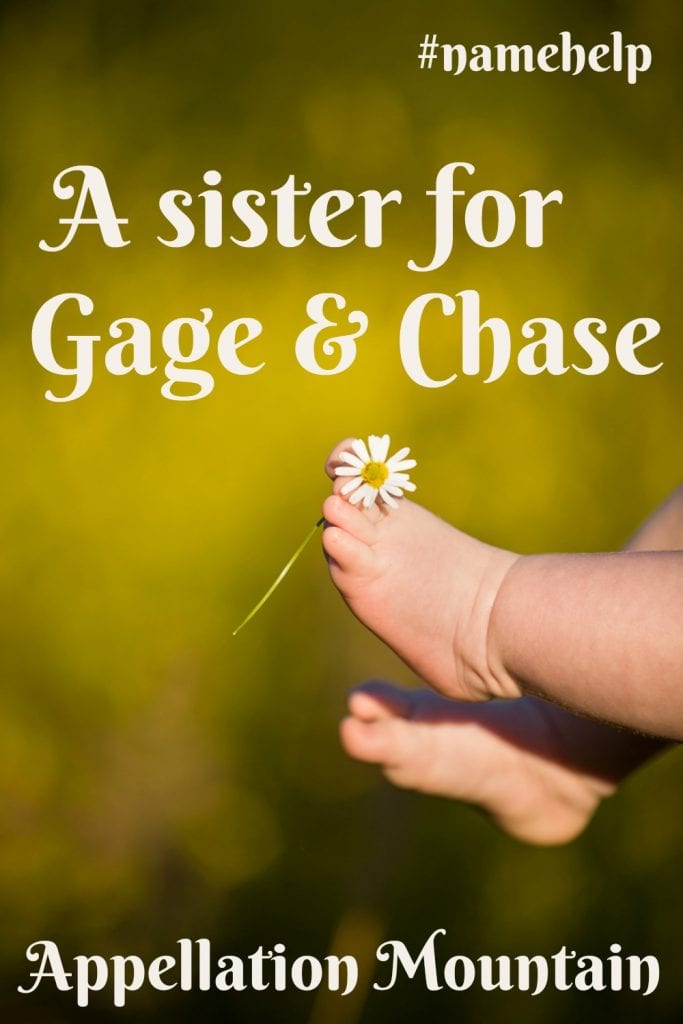 We are expecting a daughter in July. Our sons are Christopher “Chase” Edmund and Gareth “Gage” Francis.

Chase and Gage both have fun names that (as typical little boys) they love, but they also have formal names for if they prefer that when they’re older.

I’m struggling to name our little girl in a similar way! I like Charlotte or Scarlet shortened to Lottie, however my husband isn’t keen. He prefers Dorothy shortened to Dolly, but I don’t like this. Do you have any suggestions?

Congratulations! How exciting to be expecting your third.

There’s plenty of good news here. The style gap between Dolly and Lottie is tiny, and the same is true for Dorothy and Charlotte. (Though Scarlet has a slightly different vibe.) And since you’ve established a pattern that you both appreciate, this feels a little more straightforward than naming with a blank slate.

The challenges remain, though. First, it’s tough to pin down the point of disagreement. Beyond that, you have to like two names equally well – the formal name and the nickname. Plus, parents who find themselves miles apart on style know that they need to compromise. Since you’re basically on the same page, it can be difficult to explain why Dorothy is a better choice than Charlotte, or vice versa.

Let’s look at some traditional, feminine names with fun, modern nicknames and see if any of these feel like a better fit.

Cecilia or Cecily, called Cece – Cecilia charts between Charlotte and Dorothy in terms of popularity. Cecily falls outside of the current Top 1000, but feels like a familiar name. Chase, Gage, and Cece sound just right together.

Everly, called Evie – I’m taking a chance with a modern, not-at-all-traditional girls’ name. Dorothy belongs to a long list of three-syllable girls’ names ending in -y or -ie. So do modern possibilities, like Everly, Bellamy, and Romilly. Other Ev- names include familiar Evelyn, but also some rarities. If you like Evie – or are surprised that you don’t have Everly! – it’s a direction to explore.

Genevieve, called Gigi or Vivi – Genevieve qualifies as traditional and vintage, but it feels fresh and new, too. Vivi feels like a lively and unexpected nickname. Gen works, too. But Gigi might be my favorite, as French as Genevieve herself. Love Gigi but not sold on the formal name? Georgia – and Georgiana and Georgette – are options, too.

Josephine, called Josie or Posey – I’m not sure if your formal name is just Jo, or Joanna or Joelle or Josephine. But if it’s not Josephine – or, really, even if it is! – I wonder if you’d consider naming your daughter Josephine. It’s not quite like having a junior, but it might make for a sweet connection between your names. Because Josephine claims so many great nicknames, there’s plenty of opportunity to avoid confusion.

Louisa, Louise, or Luella, called Lulu or Lou – As with Evie, there’s more than one formal name that works for Lulu or Lou. Louisa and Louise lean traditional, while Luella feels more vintage. All of the options seem like possibilities.

Matilda, called Tilly or Millie – I can imagine Charlotte’s sister answering to Matilda. It works with Dorothy, too. Nicknames include Tilly and Millie. Are those too vintage with Chase and Gage? I’m not sure, but it’s worth consideration.

Scarlett or Susannah, called Scout – If there’s a downside to so many of these choices, it’s that they feel like nicknames – while Chase and Gage do not. Scout strikes me as a better equivalent, but it’s tough to pin down the best formal name. Would Scarlett called Scout overcome your husband’s dislike of Scarlett? Susannah, Samantha, and lots of other S names work, too.

Theodora, called Tori, Tess, or Dolly – Reversing the elements of Dorothy gives us Theodora, the Kansas farmgirl’s elegant aunt. Theodora comes with plenty of nicknames – Thea, Thora, Tori, Tess, Teddie, Dolly, Dot. Some feel more modern, while others carry a vintage vibe. I really like Chase, Gage, and Tess together.

I’m struggling to find a favorite on this list! I do wonder if you might do better to work backwards, choosing the everyday name first. Maybe something like:

But I’m going to turn this over to the readers now, because I know they’ll have fantastic ideas – and honestly, I could go on forever!

Readers, what would you suggest as a sister for Christopher “Chase” Edmund and Gareth “Gage” Francis?