They’re looking for a name that is:

Please read on for my response – and share your helpful thoughts and suggestions in the comments! 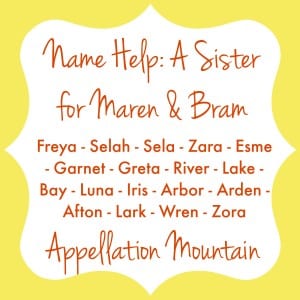 I love the names Bram and Maren, and I think you’ve got a great start with your short list!

Let’s see if we can come up with a few more ideas that meet your criteria, and then narrow down the list!

We all know a frilly name when we see it: Arabella, Eleonora, Marietta, Antoinette. They’re elaborate, even frou-frou. It can be a little bit harder to describe a frills-free name, though I’ve tried to make a list!

From your list, Garnet and River are the most tailored names. They’re also used for boys and well as girls, which seems like a line you’d rather not cross. But they’re nature names, and Garnet shares the same ‘a’ sound as Bram and Maren. So that’s a plus.

But most of the names on your list are still frills-free, even if they’re clearly feminine: Sela, Selah, Freya, Zara, Greta, Esme. None of them are too dramatically feminissa.

So there’s no way to discard any of these names as an outlier.

A Sister for Bram & Maren: My Favorites

I worry I’m not doing you any favors by adding more ideas to your list!

So let’s go back and choose some favorites.

Okay, readers, over to you! What would you name a sister for Maren and Bram?