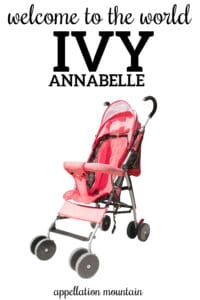 UPDATE: She’s here! Megan writes “I’m sorry it took me so long to write! We realized we loved Evie (and Edie, like someone else suggested), but really wanted her to have her own initial. (Why? No idea! But it seemed important.) So we went with Ivy Annabelle, and it’s perfect for her. Thanks so much!”

We have twin sons, Arlo and Ezra. After years of dealing with secondary infertility we’re expecting our third (and probably last) child in November.

If it was a boy, I was set on Luca. My husband mostly agreed, though his favorite name was Owen.

Our last name sounds like Nichols-plus-son, though, so N ending names aren’t always great. (Ask me how I know!!)

But it turns out we’re having a girl! And we really don’t have any favorites, just lots of names that we kind of like, but some of which are already taken.

I do like Maeve, but we’re not Irish and my husband doesn’t like it. (Yes, I watched a lot of Westworld.)

Mostly, we keep coming back to names that we know we can’t use, or names that are too much like Arlo and Ezra. Aria, Eliza … you get the idea.

When you’re all set to name a son, and then have to change course? Yeah, that’s a challenge – even if it’s a happy one!

Part of the challenge might be this: while we often like similar styles of names for sons and daughters, it’s equally possible that we’ll prefer something vastly different. We’ve all met a family with kids called James, William, and Aurora – two rock-solid classics, followed by something far more fanciful. Or their girls are Elizabeth and Katherine, but their son is Carter. Maybe it’s a family name … or maybe it’s just a change of style.

That said, the only thing I can go from are the names you’ve chosen and those you’ve liked. And it seems like your style is pretty consistent – brief, complete names that have some history and plenty of style. I can imagine Arlo and Ezra having a sister called Luna or Eden, so I think you’re on the right track.

A SISTER FOR ARLO + EZRA

Both Annabelle and Eden make me think of Ada. The question, though: how do you feel about repeating first initials? I think Arlo, Ezra, and Ada are great together, but I wonder if others might find them too close?

A traditional floral, Daisy feels more casual and cozy than Lily or Rose. But it’s plenty familiar, too – a great sister name for your boys.

My first thought was Edie. Except … if Eden is out, then maybe Edie is just too similar? Evie strikes me as  just different enough, plus it borrows the ‘v’ from Maeve. Eve is another option, as are all of the Ev- names: Evelyn or Everly, maybe?

Aria and Eliza are just a bit longer than your boys’ names, so maybe something a little on the longer side would appeal?

The downside to Lyla: it’s also spelled Lila and Lilah, and might be confused for Leila or Layla or … you get the idea. But it’s a short and complete name with plenty of style – just like Luna.

The strong ‘el’ sound in names like Annabelle and Eliza makes me wonder if a name like Stella could be perfect.

I kind of think Sylvie has it all – a different ending sound, that great middle V, and the right mix of style/distinctiveness, too. Other names come close – Sophie, maybe, or Bonnie, but Sylvie tops my list for you.

You haven’t mentioned Theo, but I wonder if it has come up at some point? Feminine form, Thea, sounds like it would fit in really well, too.

Overall, my pick is probably Sylvie – Arlo, Ezra, Sylvie. But I think Evie might be every bit as appealing – and visually, I love the way it’s another four-letter name.

Readers, what would you suggest as a sister name for Arlo and Ezra?