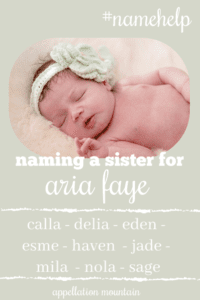 I am expecting my second child (we don’t know if it’s a boy or girl). I already have a daughter named Aria Faye. We love her name and are having a hard time choosing a name for the second.

If it’s a boy we have a name picked out: Parker Cruz. Both are family names.

The girl’s name is proving more difficult. Here are names I love but cannot use because we know people with them: Tessa, Ania, Everly, and Talia.

I also love the name Faye but I’m unsure if I should use it since it’s my daughters middle name. I like the name Bria as well but it’s my daughters name with a “B” in front instead of an “A” so I think they’re too similar. Other names I like but my husband isn’t on board with are Delphi, Delta and Brissa, pronounced breesa.

I like shorter unique names but still feminine. Please help!

Let’s start with what I think you shouldn’t do.

If possible, I’d avoid naming your second daughter Faye. It’s a gorgeous name. But little sisters inherit an awful lot of hand-me-downs. (Or so I’m told. I’m the firstborn!) Some girls will shrug it off; others will be mightily frustrated that even their name isn’t new-to-them. Since you can’t know how your daughter will react in a dozen years, if you can avoid duplication, you should.

The same thinking applies for Bria. While the sounds aren’t unthinkably close, seeing their names written together suggests that future daughters would be named Cria, Dria, and Eria. So I say they’re just too close for comfort.

Before we get to the names, I want to point out one thing. “Unique” doesn’t mean the same thing to everybody. Brissa and Delphi would be very rare choices. But Aria? It’s in the current US Top 100. I suspect you’re looking for names that don’t sound like anything you would have heard growing up.

I’m going to suggest names that are closer to Tessa or Talia: we recognize them, and we might know one or two, but they’re not too startlingly unusual, nor are they statistically popular.

Calla – The rarest name on this list, Calla comes from the calla lily. It comes from a Greek word meaning beauty. While it’s not in the current Top 1000, it fits right in with Ella, Stella, and so many two-syllable, a-ending girl names.

Delia – Another name out of the current Top 1000, ancient Delia reminds me of Delphi and Aria.

Eden – A Biblical place currently ranked in the US Top 150, Eden is short, spare, and memorable.

Haven – Is this too tailored? It’s used mostly for girls, but perhaps the sound is a little unisex. I thought it might be an alternative to Everly, and it has the same long ‘a’ of Faye.

Jade – Speaking of long ‘a’ sounds, how about Jade? It’s like Faye, but distinct.

Mila – Like Aria, Mila is a newcomer to the US Top 100. It’s feminine, and unlike anything we would have heard thirty years ago.

Nola – It could be short for lots of things, including the city of New Orleans, Louisiana. (The state abbreviation is LA.) It’s sassy, vintage, and undeniably pretty.

Sage – Another in the key of Jade, also spelled Saige.

Overall, my favorite is Esme. It’s a gorgeous name, heavy on vowels but different enough from Aria that it doesn’t seem like a repeat. Plus, should you ever have a son, Aria, Esme, and Parker sound perfect together.

Readers, what do you think? Can you suggest some feminine, short, unusual names that would work well for Aria Faye’s sister?