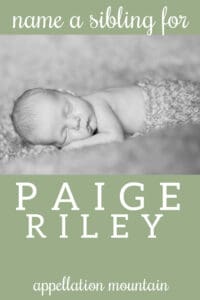 My new boyfriend and I are expecting a baby together in October. It will be a delivery surprise, which is more stressful than I originally thought when I agreed to not find out in advance.

Paige has a list of names, too! Her ideas are:

The baby’s last name will end with an S, so we are ruling out names like Miles and Brooks.

How exciting to be expecting your second – and how fun that your daughter can suggest names, too!

A few things stand out to me:

Looking at the names themselves, a few of them jump out at me:

It seems like the obvious compromise choice. Would Jackson called Jack appeal to you more? I can imagine a name like Jack Wyatt, Jack Nolan, Jack Grayson, Jack Sebastian, or Jackson Scott working well.

On the other hand, I think Jeanne sounds like the perfect middle name. It works with Kinsley, too, but I think I like it best with Avery. And how great are Paige Riley and Avery Jeanne as sister names?

Another sweet combination taking a first from your list, with a middle from your boyfriend’s favorites.

It might also be worth talking about the inspiration behind your boyfriend’s choices.

Maybe he’s just ahead of the curve – Jeanne, for example, peaked in the 1940s, so I’d expect we will be hearing it make a comeback in another dozen years or so.

But if there’s personal meaning attached to some of the names on his list, then they probably deserve more consideration.

Plus, maybe there’s an opportunity for creativity? If he wants to honor his beloved aunt Denise, that could also include her surname and middle name, for starters.

Readers, any advice on compromises between these lists? And what would you name a brother or sister for Paige Riley?