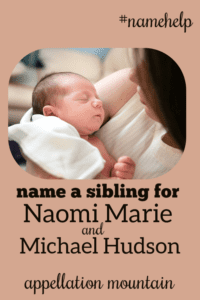 We’re looking for both boy and girl sibling names for Naomi Marie and Michael Hudson.

We prefer gender-specific names and love names from the Bible/with Christian meaning.

I love Sadie but my husband would like the full name to be Sarah, with Sadie as a nickname, which I don’t love.

Our main hesitations: Sadie and Shiloh have dog associations and good friends of ours are using Elizabeth/Ellie. Not sure what the etiquette is on that.

First question … is Sadie the same name as Sarah?

Sadie raises an interesting question: is a name still a Biblical name, with all of its original meaning and significance, if we’re using a nickname? Sara and Sarai and Sarina and Sarita all come from the Old Testament name of Abraham’s wife, drawn from a Hebrew word meaning princess. Sally and Sadie are derived directly from Sarah, so they must share the same meaning, right?

Maybe. It really depends on how you answer the question. And right now, it sounds like you and your husband don’t agree. To you, Sadie is plenty traditional and Biblical, just like Naomi and Michael. To your husband, it’s not quite – though Sarah is.

So let’s drop Sadie and Shiloh to begin, and maybe Ellie/Elizabeth, too.

Because the etiquette question is impossible.

No one owns a name, and, particularly with such a classic and popular choice as Elizabeth, there’s no reasonable expectation of exclusivity. And yet, it’s quite common for others to feel slighted in such situations. My advice is this: value relationships over names. If the relationship is casual? Choose the name you love. But maybe give your friends a heads-up so they hear it from you first.

This narrows your girls’ list to Jane and Grace, which easily turn into Janie and Gracie. Is one of those close enough to the retro charm of Sadie to satisfy? I love the sound of Naomi, Michael, and Grace. And Grace Shiloh could be the best of both world – a traditional first, and a surprising, but meaningful, middle.

If not Grace, then maybe you’d consider:

Anna – I feel like Anna is always forgotten, bulldozed by Annabelle and Marianna. But it’s quite lovely on its own, and Annie sounds like a substitute for Sadie.

Dinah – I wonder if you’re looking for something just a little bit different? And if so, would Dinah suit? It’s not even in the US Top 1000 – crazy, right? And yet it’s a little bit like traditional and familiar Sarah, two syllables, ending with the -a sound.

Leah – Every bit as Biblical as Sarah, I still think Leah sounds a little more contemporary. Maybe that’s because we’re wild about so many L names for girls, from Lola to Lily to Luna.

Lydia – While we’re in the Ls, how ’bout Lydia? I think it’s the perfect sister name for Naomi.

Rachel – Sure, Friends makes Rachel a permanent resident of the 90s. But it’s also a Biblical mainstay that could wear well on a daughter today – familiar, but far from common.

Your boys’ list seems very workable. Except Alexander/Xander and Henry don’t appear in the Bible, and I’m not sure their meanings are especially spiritual.

That leaves Caleb and Joseph, both of which would be absolutely great choices. I also wonder if you’d like:

Ethan – It’s falling just slightly in popularity right now, but it remains a rock solid choice for a son. It’s handsome and storied, and sounds like a brother for Michael and Naomi.

Isaiah – Isaiah seems rather stylish, and yet, there’s no question it’s a meaning-rich Biblical choice.

Overall, my favorites are Grace Shiloh and Caleb Isaiah. But I know we’ll get some great suggestions from the community, so let’s open it up to suggestions.

What would you name a sister or brother for Naomi Marie and Michael Hudson?

Image by Iuliia Bondarenko from Pixabay