We have two boys named Maximus and Leonardo – called Max and Leo.

We are pregnant with #3 and looking for a name to follow the pattern – a grand name with a short, snappy nickname!

We are not finding out if it is a boy or a girl, but if it’s a girl our top pick is Pearl!

Our last name is Portuguese, and pronounced Al-may-da.

Read on for my answer – and please leave your thoughtful suggestions in the comments!

What great names for your boys! And I love the name Pearl for a girl.

At first glance, it seems like there are dozens of names that fit your boys’ pattern. But the more I thought about it, the more I realized that it wasn’t as straightforward as it seemed!

We’re looking for a boys’ name that is:

That last piece feels like the most limiting factor. Plenty of long names feel classic, even quiet. That’s not what we’re looking for here. 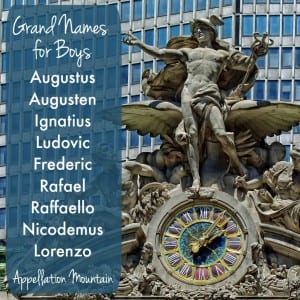 Usually, I have a clear favorite or two by this point in a post. But to be honest, this time I just don’t. I think Augustus/Augusten is the most obvious match, with Gus as the nickname.

In terms of pure style, though, I’m most drawn to Raphael called Rafe. It feels like a big name, and yet one that is different from your older sons’ names. But … turtles! Would Max be annoyed that he hadn’t been called Donatello? Or would it be a really cool thing right through third grade or so, and then be a non-issue?

Assuming Rafe is out, I love the idea of Nicodemus called Nico best. Nicodemus is far more obscure than Maximus or Leonardo, so that’s not ideal. But I think it’s a solid style match, and the three sound like brothers – Max, Leo, and Nico. Or Nicky – Max, Leo, and Nicky.

UPDATE: Jasmine writes, “Thanks for the help but we ended up having a baby girl!!! Paloma Delila Fern. Middle names after grandmothers, Diana, Lila and Fernanda. We are so in love!”