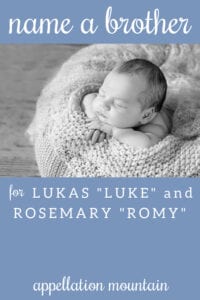 We are expecting our third child this fall. Although our plan was for the sex to be a surprise, we inadvertently learned that we will be welcoming a boy at a recent appointment.

Our older children are Luke and Romy. They go by Luke and Romy the majority of the time, but their given names are Lukas James and Rosemary Helena. James is a family name, and Romy’s grandmothers are Mary and Helena. Our last name is three syllables, ending in “son.”

We had a few girl names that we were thrilled with, but finding a boy name has been a challenge. We are happy to use a common name if we love it, but the “sweet spot” names seem more our style. My husband also admits that he prefers traditional names for boys more than for girls, as he was excited to call a girl Sunny or Cleo.

So far, our top contenders are Wesley Paul and Rhys Edward, with both middles being family names. I’m more convinced than my husband that one of those will ultimately be the name. Maybe one stands out? Other names we both like are Ben, Leo, Elliott and Sam.

My husband is not sure that he’s heard a boy name that he loves, despite my listing the top 1000 ad nauseam. On top of that, we are both from large families, and with the exception of my father’s side (where most men are Sam or Paul), it’s frowned upon to repeat a name. Looking at the names that are already taken, we are amazed that Luke was available and laugh because this generation looks like one giant boy sibset, including:

We have discussed how Alex, Dylan, Jack, Owen and Gabe would have been contenders but have very likely been ruled out.

Are there names that click with Luke and Romy that we are missing? I’m sure that you and your readers will have valuable insight.

And wow – yes, there are a LOT of great boy names that work with Romy and Luke, but they’re already taken.

Between Wesley and Rhys, I didn’t think I had a preference. But then I tried saying your surname with Wes instead of Wesley. Does the -son ending make it sound too much like Wes Anderson, the director? (Think Moonrise Kingdom and The Grand Budapest Hotel.) I’m not sure that it’s a dealbreaker. After all, cultural references fade. But if you’re evenly split between Wesley and Rhys, it tips my vote to Rhys.

Besides, Luke, Romy, and Rhys is pretty perfect. I love the visual symmetry of the four-letter (nick)names.

But let’s look for even more possibilities.

A BROTHER FOR LUKE and ROMY

I’m not sure if this is quite your style, but would Charles-called-Chase appeal?

James Dean and Dean Martin and Supernatural’s Dean Winchester all make this name effortlessly cool. It was big in the 1960s, but it’s climbing in use again now.

There are lots of longer names for Finn – Finley, maybe? Griffin? But I think it’s perfect with Luke and Romy, regardless of whether you choose a formal name.

It’s a little close to Luke, but I think they’re still great together. I’ve heard Jude used as a nickname for Julian, which could be even better still.

Is Miles an option? It sounds exactly right with your older kids’ names, but I see that Milo is already taken. (Then again, Cleo and Leo rhyme with Theo. At some point, so many names are in use that a little bit of overlap feels inevitable.)

As bright and upbeat as Jake, Nate could be short for Nathaniel or Nathan, but works nicely on its own, too.

An o-ending name that comes naturally from Nicholas.

Ezekiel is a mouthful of an Old Testament name, but Zeke is sleek and modern.

I’ve mostly stuck with single-syllable names, though maybe that’s part of the problem – would you be happier with something more like Elliot?

Overall, though, my favorite for you is probably Finn, with Dean and Nico close seconds.

Readers, what would you suggest to Linnea?