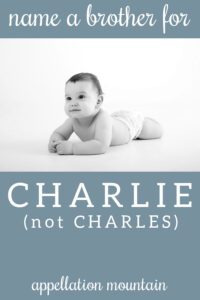 We have a son named Charlie, NOT Charles.

Our second son (and last baby) will be here in May, and we’re not sure about names.

I like James, but my husband wants to call him Jamie. I think Jamie and Charlie are too cutesy together, and I grew up with a girl Jamie who kind of ruins the name for me. Plus, I like that we don’t have to explain what to call Charlie, so I want another name that isn’t shortened.

Kai was also on my list for Charlie, but my husband thinks it’s a little too different. And I’m not sure about it with our last name.

My husband suggested Ryan, but we know a lot of adult Ryans, including a colleague on my team, so I think it’s out.

And then my dad suggested Parker, which I loved immediately. Except it was a joke, because Charlie Parker, the jazz musician.

Our sons’ last name is hyphenated and sounds like Howl-Berk or Halberk, if you say it fast.

We keep looking at lists, but nothing sounds like our son’s name. Help!

I hear a few factors here.

First, your style is a little more casual-cool. It sounds like your husband prefers more classic, or at least traditional, choices. That makes Charlie a great compromise.

But happily, it’s not only compromise possibility!

It also sounds like your husband prefers names that he recognizes. It’s tough to wrap our heads around what kids are really being named now, not until we have a couple years’ worth of school assemblies and soccer team rosters to draw from. Because Kai is, of course, a fast-rising Top 100 favorite. While Ryan? It’s definitely in dad-name territory, though plenty of babies are still given the name.

The other hurdle might be your surname. Sounds-like-Halberk means you probably want to avoid names ending with a, because they’ll run into the beginning. But anything with a strong B/R/K might conflict with the last syllable. So … not insurmountable, but I did find myself saying “Arlo Halberk? Hmmm … no.”

That means we’re looking for a casual-cool name with enough history to satisfy you both, and a sound that balances well with sounds-like-Halberk.

A BROTHER FOR CHARLIE

If you like Parker, I wonder if other ends-with-R names would appeal? Asher has Hebrew roots and means happy. While it’s relatively new to the US Top 100, it has plenty of history. Plus, Ash names – from Ashley to Ashton to just Ash – have been around.

I’d call Emmett homespun. It’s a capable name, at home on a hiking trail or a college lecture hall. And I like the way the -ett ending pairs with sounds-like-Halberk.

As with Asher, Finn’s history traces back over centuries and then some. It has the same casual, breezy vibe as Kai. But all of that history might make it feel a little more familiar to your husband.

Sticking with single-syllable names, it’s hard to argue that Luke is anything but traditional. The repeating hard K sound is noticeable, but Luke is such a classic choice that it’s easy to overlook.

The first name that came to mind! Short like Kai, with a casual-cool energy that matches Charlie.

Maybe it’s Charlie Parker that put Miles Davis in my head, but why not Miles? It’s conventional but particularly stylish right now.

Ryan and Kai share a vowel sound. Add in a dollop of Parker and you’ll have Ryder. I’m guessing Ryder might be a little new for your husband, but it’s an established surname. (Think of golf’s Ryder Cup.) And it’s been used pretty regularly since the early 2000s.

If your firstborn is Charlie-not-Charles, could his brother be Theo-not-Theodore? Plenty traditional, but also very in step with twenty-first century naming.

CHARLIE’S BROTHER SHOULD BE …

Overall, my favorites are Max and Theo. I think they’re hitting the same notes as Charlie.

But I threw in some dark horse possibilities, too, because I can easily imagine Charlie’s brother answering to Ryder or Emmett or Finn.

We tend to try to duplicate the style of our firstborn’s name. But sometimes a new child is a chance to start fresh.

Readers, over to you – what would you name a brother for Charlie?