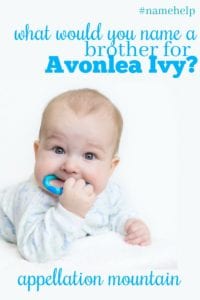 My husband and I are expecting a baby boy in September. We don’t share the same taste or naming style so it’s been especially difficult to settle on a name we both like or will at least tolerate. We have a daughter named Avonlea Ivy and her first name was “my pick” (according to my husband) so he feels he should get naming rights this time around, except I contend that we both equally liked and agreed to her first name while he chose her middle as a nod to the Ivy wall at Wrigley Field.

We are seeking a name that is as uncommon as Avonlea so anything that’s near the top 100 is out. My husband’s top pick is Nixon but I don’t care for it at all, no matter how many times he suggests it. I don’t mind the sound of the name but I cannot remove the negative political associations from it and that makes it a hard pass from me.

His other suggestions center around famous Chicago team sports figures (like Banks, Sammy, Bryant, Wrigley) but none of those are my taste. He also really likes Legend. We agree that we don’t want any Biblical or traditional names. He also seems to favor names that have an x in them, although this isn’t a requirement.

If I had to name this baby tomorrow, I’d vie for Mattis because I love the connection to the Marine Corps (General Mattis) since my husband and I both served and met as Marines. Other names we have tossed around are Angus, Douglas, and Richardson in honor of fallen Marines who meant a great deal to me, but I have a hard time picking one name over the other and feeling like I’m only honoring one.So, in a nutshell – we are seeking an uncommon name that we will both love and bonus if it has a nod to the Marine Corps. Middle name will likely be Marshall as it’s a family name but I wouldn’t mind using his pick of Legend in the middle spot.

Help! September will be here before we know it and so far baby boy is nameless!

The good news? You and your husband are united in your preference for unusual names. Though maybe you’d both be surprised to realize that Legend ranks #255 in the US right now. Louis, Stephen, and Reid are all less common than Legend. Does that change anything?

Maybe not, because you’ve said that you want to avoid the Top 100. And yet, looking at the names on your shortlist, as well as the name you chose for your daughter, I wonder if that’s

The name from your list that leaps out at me is Merritt. Like Legend, it’s a word name. Well – not exactly like Legend. But it’s in the same broad category. It’s also outside of the current US Top 1000. So is Mattis, of course, but I wonder if Mattis would shorten to the more familiar Matt? And is that a benefit or a problem? After all, Avonlea sounds an awful lot like very popular girls’ names, from Top Ten Ava to so many three-syllable, ends-in-ee girls’ names.

Lennox and Wilder both rank in the Top 1000; Sterling strikes me as the other name that fulfills most of your criteria.

But I should add this: parents often play it just a little bit safer when naming a son. Traditionally, more boys receive a Top 1000 name than girls. (Though in recent years, more girls than boys now receive a Top Ten name – so the times, they are a-changin’ …) Still, there’s no rule that says both children’s names have to be equally unusual – so maybe I’m too quick to rule out Wilder and friends? And you’ve only  said that you want to avoid the Top 100 – which would put all of those names on the place

Callahan – Callahan has the same rugged, capable vibe as Wilder, but it’s much less common – it doesn’t crack the US Top 1000.

Exton – The problem with ‘x’ names is that lots of people love them! That’s taken names like Paxton on a march straight up the popularity charts. Exton, though, remains pretty rare. It’s a sometimes-heard place name, and it’s also the given name of Robert Downey Jr.’s younger son. Again, it doesn’t rank in the current Top 1000. I do think it sounds very wearable for a boy born today.

Hayes – Thinking about famous Marines inevitably brings to mind the Iwo Jima Memorial. One of the men depicted was Ira Hayes. I think Hayes has that fresh, modern sound you’re after. The only possible hitch? Hayes ranked #409 as of 2017. Still, I think it’s too good to leave off the list.

Huxley – Huxley has that cool, middle-x that seems like it appeals to your husband. At #790 on the current list, it’s pretty rare without actually being obscure. It feels masculine and unexpected, while still being on-trend. Another bonus? It’s gently literary. Just like Avonlea brings to mind Anne of Green Gables, Huxley might make some think of the British writer Aldous Huxley, best known for Brave New World.

Noble – It seems like a word name might appeal. Noble shares Nixon’s ‘x’, but sheds the controversy. It’s outside of the current Top 1000. While it has a similar vibe to Legend, I think Noble might be easier to wear. After all, it’s a virtue we can all aspire to achieve, while Legend? That’s a high bar!

Ramsey – Ramsey feels like a strong name, and while it’s rare as a given name, we all recognize it as a surname. Animal names are having a moment, but I’d put Ramsey closer to Leo – a subtle animal-inspired choice – than, say, Fox or Bear.

Revere – There weren’t nearly as many names specific to the Marines as I expected, but how about a different kind of military hero? Paul Revere’s midnight ride is the stuff of American legend, and feels like an appropriate nod to a family who has built their careers in service to our country. Plus, it has a similar vibe to Legend, and shares Avonlea’s ‘v’ – a subtle, but effective way to link your children’s names.

Riggs – There’s a whole cluster of names – Bridger and Briggs and Riggs – that just sound kind of tough. Resilient, even. I can imagine any of these names wearing well on a brother for Avonlea. The ‘s’ ending reminds me of Mattis, and it picks up on the sound of Wrigley, too.

If not Merritt, then I like so many of these names for your family! Riggs Marshall has a lot of appeal; I like Ramsey Legend, too. And Huxley strikes me as the exactly perfect compromise between Nixon and Wrigley, if, of course, you like the sound, too.

Let’s turn this one over to the readers, because I know they’ll have some great insights.

What would you name a brother for Avonlea Ivy? Bonus points for ties to the Marines and/or Chicago sports.