My husband and I are thrilled to welcome our first child into the world this spring. We are waiting to find out the sex but have easily agreed on a first choice for a girls name as well as a backup if it doesn’t feel right but we cannot come to an agreement for a boys name!

We would like our names to come from or be inspired by mythology as my husband teaches and is in love with ancient history.

We would also like our boy name to flow well with the girls names we’ve chosen as we would definitely use them later. They are Lorelei and Persephone.

So far our list includes Ajax, Ronan, and Magnus, but nothing has felt right yet. 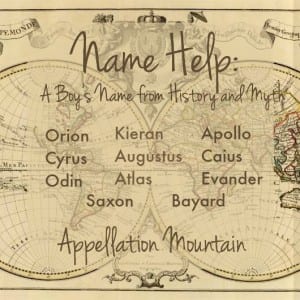 History and myth are such a fabulous well to draw from, but it can be tough to get it right. I have a hard time imagining a kid called Anaximander – but maybe I’d be won over if I met that child in person. Finn is straight out of Irish myth, but because it’s such a popular name for boys, it might not have the vibe you’re after. Other names, like Hercules, might be a lot to live up to.

So where’s the sweet spot?

We’ll start with the most mainstream possibilities, and then move to the more obscure:

Orion – The constellation means that we all know Orion is the hunter, with those bright stars in his belt. At #383 and rising, it’s mainstream, but hasn’t lost any of its ties to myth and the night sky. It’s also a little longer, and pairs well with a sister called Persephone or Lorelei.

Cyrus – Cyrus ranked #461 in 2014, but unlike Orion, this name is trending down. Overall, though, Cyrus has ranked in the 400s and 500s for the last twenty years, making it a steady name. Cyrus II of Persia founded the Achaemenid Empire, ruling much of the Near East in the sixth century BC.

Odin – Thor and Loki dominate the silver screen, thanks to the Marvel movies. But in Norse myth, it’s Odin who is king. It’s a short, simple name, and while it might be confused for the more popular Owen, at #476 in the US, it’s not completely unknown.

Kieran – How can it be that Kieran isn’t more popular? The Irish import charted at a mere #576 in the US in 2014. This one isn’t from myth or legend, but instead comes from history – there were two saints Ciaran among the Twelve Apostles of Ireland. But Ciar was the song of Fergus mac Rossa, a king of Ulster, and many Irishmen claim descent from him. It’s among the most international names on this list. Kiran comes from a Sanskrit word meaning sunbeam, and Terrence Howard recently named his son Qirin, inspired by a mythical beast from eastern legend.

Augustus – Honestly? I almost left Augustus off the list. August, Gustavo, Agustin, and Augustine are all in the Top 1000, which makes me wonder if Augustus feels like a popular name, not a historic one. And yet, it’s hard to overlook the name of the first emperor of Rome. Augustus ranked #544 in 2014, but due to the many similar names, it might feel slightly more familiar.

Atlas – Atlas soared more than 130 places in 2014, to rank #646. That’s still fairly obscure – comparable names are Conrad and Nelson, not choices you’ll hear on every playground. It’s an obvious choice for a lover of history and myth. Not only did Atlas hold the heavens on his shoulders, he also gave his name to every collection of maps and WHAT.

Apollo – Even before Gwen Stefani gave the name to her third son in early 2014, Apollo was on the rise, ranking #801 last year. And why not? Apollo was the Greek god of poetry and the sun, medicine and knowledge. He was an accomplished musician, too. Sound-wise, Apollo is right on trend – ancient and modern at once. And, like Orion and Augustus, it’s a longer name. Lorelei and Apollo; Persephone and Lorelei.

Caius – Caius could be a two-for-one. Caius is another form of Gaius, as in Gaius Julius Caesar. So that’s history aplenty. And then there’s Cai, the Welsh form of Kay, as in the knight from Arthurian legend. Caesar and the Knights of the Round Table? I feel like that’s a win. Caius is not currently in the US Top 1000, though Kai – yet another similar name with different roots – stands at #177.

Evander – One of the first names that came to mind when I read Persephone and Lorelei was Evander. It sounds like a mash-up of popular boy names Evan and Alexander, but that’s not the case. Instead, Evander was a hero of the Trojan war. The name means “good man,” which ought to be a reason for parents to consider Evander. And yet, this name remains way under the radar. In 2014, the name was given to just 92 boys.

Saxon – It’s not a person, but a people. Saxons can refer to several Germanic tribes in the early Middle Ages. One group eventually settled in England, while others remained in Germany. As names go, it’s another rare choice. But it fits with Lorelei and Persephone.

Bayard – And one last thought: how about Bayard? It’s the name of a horse, of course, who first appears in an epic Old French poem, a chanson de geste. It’s not unknown as a surname and given name, and the bay sound is quite stylish.

Hmmm … is that overload? There are just so many great possibilities in this category! One thought might be to narrow it down to a specific type of legend and lore, or maybe to look for a name that isn’t expressly Greek or Germanic, since your other two favorite names come from those traditions.

Readers, which boys’ names inspired by myth and legend would you suggest?