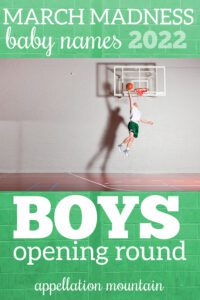 The first weekend in March brings the biggest competition of the year.

Well … at least ’round here.

That’s right! It’s time for the opening round of March Madness Baby Names.

The girls started their playoffs yesterday, so today it’s the boys’ turn.

The most popular names searched at Appellation Mountain look nothing like the US Top 100. After all, this site is no democratic database, with every name equally weighted. Instead, the most popular names often wait neglected, while quirky and obscure favorites feature on the home page.

That means a sweet sixteen of most-viewed names from the site as quirky and diverse as you might imagine.

I set them up in brackets, and you vote until we have just one final name to crown champion, for boys and girls.

Vote for the name you like best – no matter how you define it. Nearly every year, some obscure gem beats out a popular mainstream favorite.

But hey, that’s why we play the game.

So which names win? Here’s the complete list of past champions:

The result? A list of just slightly ahead-of-the-curve names sitting in the victors’ circle. In fact, most winning names gain in use in the years immediately following their wins.

Let’s look at the names competing in the 2022 tournament.

A * indicates that a name also took part in the 2021 March Madness competition.

An old school name with that cooler-than-cool O ending. Bonus? It’s a palindrome.

A place name borrowed from a mythical creature, and now the name of plenty of real kids, too.

A cool surname name with the irresistible X factor.

An Irish import with a strong meaning: chief.

Another Hawaiian name set to follow Kai up the charts.

Common as a surname, rare as a first.

Projects health, wealth, and an overall sense of calm.

A Welsh import associated with the legendary Merlin.

The hottest nature name of our moment for boys.

Lots of names start with Saint: Sinclair. Santiago. We pronounce St. John in a rush: sin-jin. But we often still spell it St. John, making this one of the most curious names to consider.

A fast-rising favorite, thanks to the brief, bright sound and a great meaning: ocean.

It means venerable, but August brings to mind the lazy, hazy days of summer.

A smooth surname name that owes something to Hayden, much to Miles.

As brief as Cole, as borrowed from nature as Stone.

Still with me? Good! Because it’s time to …

TIME TO VOTE YOUR FAVORITES

Thank you for voting! Polls will stay open until March 10th. Check back on March 12th to see which of your favorites advanced – and, of course, to vote in the next round! 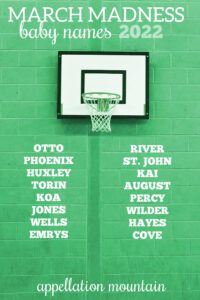