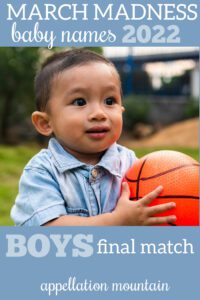 And just like that, it’s time for the FINAL match-up for the boys in March Madness Baby Names!

Every year, the contest begins with the sixteen most popular posts on boys’ names from the prior calendar year. (Past champions of March Madness Baby Names cannot compete. Check out the full list here.)

I say this a lot: the most popular names at Appellation Mountain tend to be quirky + specific. Why? Maybe because a featured name here gets an in-depth treatment usually reserved for Top 100 names and style stars on a more typical site.

Or maybe it’s just because AM readers can be champs at spotting trends. Often a victory in March Madness foreshadows a bump in general popularity in May.

For all those reasons and more, these sixteen names rose to the top for 2022:

Seeding is determined based on a name’s total number of page views on the site. As in that other March Madness tournament, this only means so much. The final two names standing this year started out near the bottom of our sweet sixteen.

And it was your votes that narrowed the field to four final names.

After a near-tie in the first few hours, August sailed to victory with 67% of the vote over Otto. My guess? We’ll see more of Otto in years to come. Right now, though, August is the white-hot favorite.

The next contest was even closer, but Hayes pulled out a win, with 54% of the tally over Wilder. Again, Wilder is clearly a rising favorite. This really could have gone either way.

That means our final match-up is …

They’re the kind of names that probably make lots of parents’ short lists – in fact, I can imagine a parent being torn between the two names, or even naming their two sons August and Hayes.

That makes for a great final match, of course.

Voting runs until Wednesday, March 30th. Check back on the 31st to learn which names are declared The Victors of this year’s March Madness Baby Names tournament!