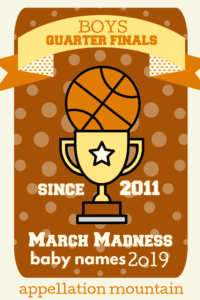 The votes are tallied, and we now know which boy names have triumphed in the opening round of March Madness Baby Names 2019!

Before we move on to voting in the Quarter Finals, let’s review the results of the Opening Round:

Some of these match-ups feel like impossible choices! Voting remains open through Thursday, March 14th.

The new contests are waiting for your votes!

The Ors and the Ars: Soren v. Arlo

The sounds are surprisingly similar, though the styles seem distinct: Soren faces Arlo.

Thank you for voting in this round of March Madness baby names! It just gets harder, doesn’t it? Check back on Saturday, March 16th to see which names advance to the SemiFinals … and, of course, to vote once more!