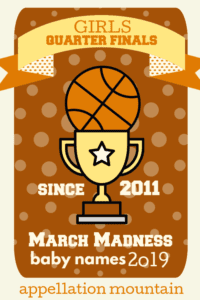 You’ve spoken, and we now know which names advance to the Girls’ Quarter Finals in March Madness Baby Names 2019!

Let’s look back at the Opening Round:

I think this next round always feels especially difficult! Voting will be open until Thursday, March 14th.

The new contests are ready and waiting …

They sound like sisters, or maybe two names that parents just can’t choose between! This is a tough match-up: Faye of the fairies, or Flora of the gardens?

Neither of these names were heard even twenty years ago, but both are attracting more + more attention in recent years. Import Elowen takes on sleek Marlowe.

Finnish import Lumi shares vowel sounds with lots of chart-toppers. But can it take on the bright o-ending, but still traditional(ish) Margot?

I find both of these names downright enchanting! Flower-ful Margiold takes on beloved Esme. They’re both just different enough to catch your attention.

Thank you for voting in this round of March Madness baby names! It just gets harder, doesn’t it? Check back on Saturday, March 16th to see which names advance to the SemiFinals … and, of course, to vote once more!