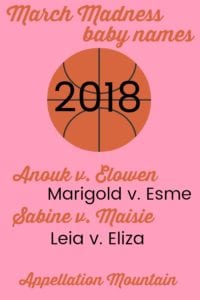 The opening round brought a few surprises. And, of course, a couple of perpetual disappointments. Why is Elodie always a bridesmaid, but never a bride? The name makes it to March Madness nearly every year, but has yet to win.

I think I might be able to guess the winner from this week’s result – but, to be honest, every year surprises me.

Time to review the results from the opening round!

Let’s see which names continue to advance towards the trophy. Ready, set, vote!

Two rarities face off in this round: French-Dutch Anouk against Cornish Elowen.

Botanical Marigold or literary Esme? I predict this might be the toughest match of 2018!

Is your style more Star Wars or My Fair Lady?

Voting will remain open through Thursday, March 15th. The winners of each match-up advance to the March Madness 2018 baby names SemiFinals on Saturday, March 17th. We’ll keep voting until we announce our winners at the very end of the month!