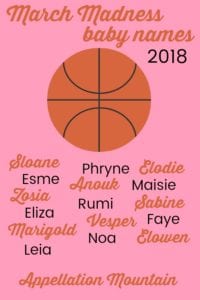 Just one short year ago, we launched March Madness baby names 2017, a contest that ultimately resulted in gentle nature name Wren joining the elite group of names that have been voted readers’ favorite over the years.

In order to enter the contest, a name must be among the most-viewed in the prior calendar year. That makes for a quirky set of contenders, mixing pop culture favorites with headline-worthy choices and a few steadily great names, too.

A few of these have competed in prior years. Sabine, Anouk, Vesper, Elowen, and Faye are among the names that started out in our 2017 contest, too. But some are making their debut in 2018’s March Madness, most notably the regal Leia.

The past winners, however, tend towards the more mainstream. Here’s the list:

Following Cora’s back-to-back wins, we decided that no name could defend the title. That means that a few names were ruled out of this year’s competition.

But there’s no shortage of contenders. Let’s take a look at this year’s contestants, and get ready to vote in the March Madness baby names opening round: girls’ edition!

Sassy, sweet, and retro, too! They sound like sisters, but you can only choose Maisie or Faye!

The Opening Round will narrow the sixteen favorite names to eight. We’ll then proceed to four, and finally two names, which will face off in the Final Round on March 24th.

Voting will remain open through Thursday, March 8th. Check back on Saturday, March 10th for the quarter finals round and see which of your favorites advance. Any guesses as to which name will win it all?