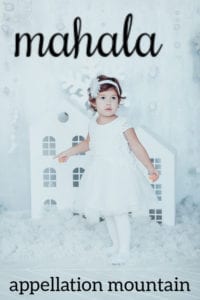 Mahala sounds modern, but it comes straight of the Old Testament.

Thanks to Tim for suggesting a name from his family tree as our Baby Name of the Day.

The Old Testament gives us Mahlah and Mahalath. Close, but not quite the same thing. They’re fairly minor characters, and not necessarily all female.

Mahlah is listed as a daughter of Zelophehad. Her name means forgiven.

Mahalath – or Machalat – means lyre. In the Old Testament, she’s daughter to Ishmael and wife to Esau. A second Mahalath is mentioned, too; the wife of King Rehoboam of Israel.

I’m guessing parents dropped the ‘th’ from the name to arrive at Mahala.

Like many a Biblical rarity, the Protestants embraced it during the Reformation era. Plenty of those names remained in use, and many made their way to Colonial America.

By the nineteenth century, a steady stream of women answered to the name, real and fictional. A handful of girls have received the name every year since the US Social Security Administration starting reporting such information.

You might have stumbled across the name in lots of places:

Maybe the one that fascinates me most comes from Tennessee. Mahala Mullins became famous as a bootlegger, producing moonshine on the state border with Virginia. Her family called her Aunt Haley. Contemporary news reports gave her name as Mary and Mehala, and even sometimes Betsy – but that was her sister.

Ready for a twist? Some sites list Mahala as Native American. It seems plausible – after all, Tallulah likely has Creek or Choctaw roots.

But it appears to have evolved in California, as a generic name for any woman of Native American descent. It’s suggested that it started with a mispronunciation of mujer – the Spanish word for woman. It could have been used as a form of Mary among Native peoples. (Remember, Kateri evolved from Catherine.)

Still, there are around 175 indigenous languages spoken in the US today, a sharp decrease since European settlement began. So it’s possible that another language offers an origin that I’ve missed.

But then there’s the great Mahalia Jackson, born Mahala, in New Orleans in 1911. She added the ‘i’ early in her professional career, elaborating her name. Like many others, she answered to the nickname Halie. Maybe that’s because she shared her name with her aunt, who raised her after her mother died young.

The Queen of Gospel went on to become a leader in the Civil Rights movement in the 1960s. She contributed financially, performed at benefits, and often sang at rallies – including 1963’s March on Washington, right before Martin Luther King Jr. delivered his “I Have a Dream” speech.

If you guessed Mahala had roots beyond the continental US, that’s understandable.

In Hawaiian, mahalo means thank you. And mahal means beloved or dear in Tagalog, widely spoken in the Philippines.

And then there’s the Taj Mahal, final resting place of Mumtaz Mahal, Empress Consort of the Mughal Empire from 1628 to 1631. It’s not her name, but a title bestowed upon her by her husband. It means “exalted one of the palace.”

But none of these are given names. So while the meanings might appeal, they’re not the reason Mahala originally came into general use.

Most seem to pronounce it with a long A sound – ma hay lah. That makes it a substitute for fading favorites like Michaela/Makayla/McKayla and, of course, all of the Haileys.

But so far, it remains rare – a name seldom heard, and even less frequently discussed. If you’re after a name that spans history and cultures, a distinctive choice with a story to tell, then Mahala might belong on your list.

Do you prefer Mahala or Mahalia? Would you say it with a long A or more like hall? 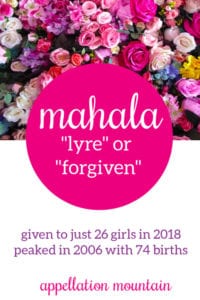