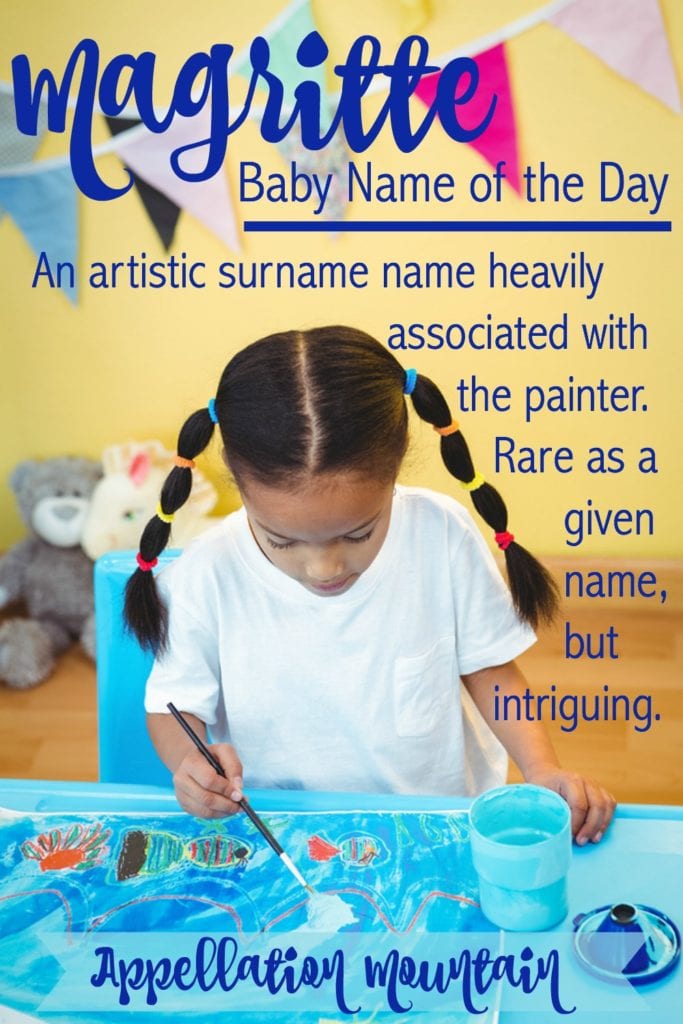 Thanks to Hayley for suggesting our Baby Name of the Day.

Born in 1898 in Belgium, René François Ghislain Magritte’s work remains widely admired, and quite influential, all these years later.

As a young man, he studied art in Brussels, then worked in advertising. By 1927, he was painting full-time and mounted his first exhibition. Predictably it was mocked and ridiculed. He fared little better after relocating to Paris. Only towards the end of his life, in the 1960s, did he achieve wider success. He died in 1967.

Even if you don’t recognize the artist’s name, you’ll know some of his work – think of men with fruit obscuring their faces, or other unexpected pairings of objects.

Other artists, including Andy Warhol and Jasper Johns, cited his work as influence. He’s generally considered a surrealist, and a forerunner of pop art.

It’s impossible to say the surname and not think of the artist.

But where does the surname come from? It’s not very common, but it is the artist’s birth name, and I found a few other Magrittes, most from Belgium, in various records.

We also know he was born in Lessines, Belgium. Lessines is in the Walloon region, and French is the dominant language.

That probably rules out Magritte as a form of Irish and Scottish names like McGrath.

It may be a cousin to Maigret, a French surname that brings to mind Inspector Jules Maigret, a Paris police detective created by novelist George Simenon in 1931. The inspector’s adventures inspired adaptations for radio, television, and film throughout Europe and Japan.

But I couldn’t find definite origins for Maigret, either.

Another possibly is Magrette, a surname dating to the 1200s. I found a watch company in New Zealand calling itself Magrette, but no more information on the name’s origins.

It also reminds me of names like Colette, Piette, and Gillet, all surnames derived from given names.

Speaking of given names, Magrit and Magritt are sometimes-seen forms of Margaret in Norway, and I found both spellings in US Census.

Somehow it seems appropriate that Magritte’s only meaning is what we know of the artist’s legacy.

Magritte has never been given to even five children in a single year, at least in the US. I found a very few mentions of the name in US Census records, so it’s not completely unknown.

Artist surnames like Monet and Matisse have attracted some attention in recent years, which makes the case for investigating other surnames of well-known artists.

But there’s another reason I think this surname works – and works specifically for girls. It sounds so very close to Margaret. Like Margaret, it shortens to Maggie. In fact, it might be a form of Margaret, thanks to the Norwegian rarity Magrit. It also reminds me of tailored Hollywood surname name Greer.

If you’re after an unusual possibility for a child’s name with an artistic feel, Magritte is one to consider.

Do you think Magritte works as a given name? Do you like it better for a boy or a girl?