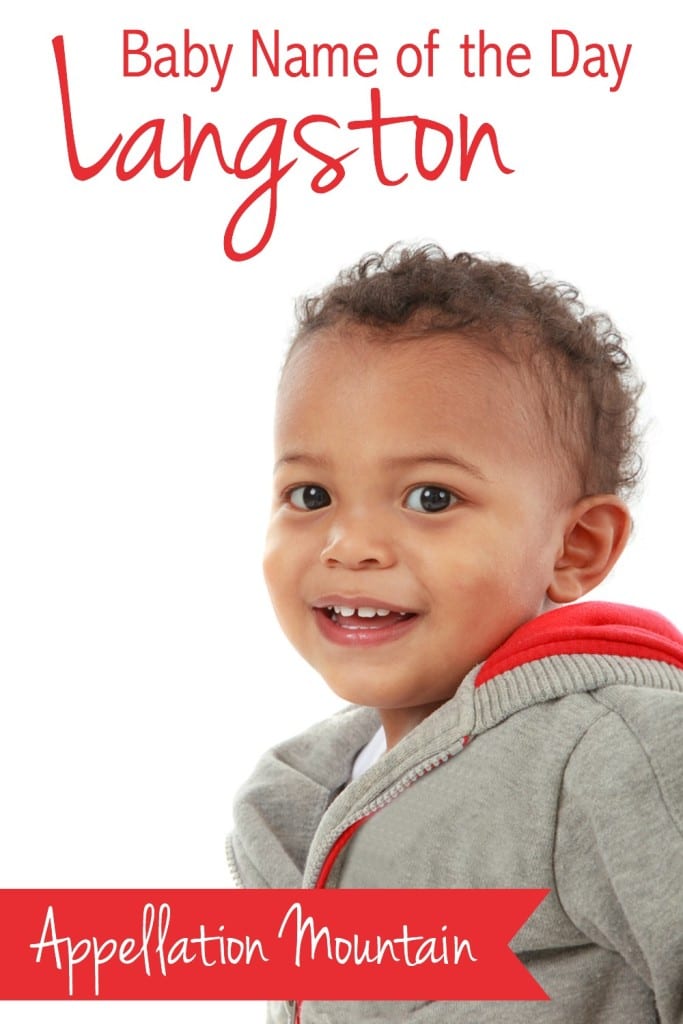 Langston is a handsome surname name on the upswing in recent years, with ties to the Harlem Renaissance.

Thanks to Jules for suggesting our Baby Name of the Day.

This name’s meaning is straightforward. The first element means long, from the Old English lang, and the second refers to a stone.

Or is it? A “long stone” was also known as a menhir – a very large stone, typically sort of square and tapered towards the top. They’re also called standing stones, and were found throughout Western Europe. Put ’em together, and you have Stonehenge, or one of the other similar formations.

While the larger formations almost certainly had spiritual significance, it’s less clear what the single stones symbolized or why they were erected. Incidentally, menhir simply comes from the French for “long stone.”

Many centuries ago, someone with the surname Langston was likely from an area known for a long stone or two.

Today, the is rich with poetry and history, thanks to the talented James Mercer Langston Hughes.

Hughes was born in 1902, in Joplin, Missouri. He became a poet, novelist, playwright, and social activist. He’s also one of the founders of the Harlem Renaissance.

That bonus middle name was his mother’s maiden name. Caroline Langston came from a prominent African American family, educated and affluent. They were active in social causes beginning with abolition. It was a significant name to carry.

Hughes’ talent was evident from an early age. He was his high school’s class poet, and after a series of odd jobs and travels, took an office job in Washington DC. But office work left him little time to write, so he quit – and became a busboy. (DC natives, by now you’re surely thinking of these restaurants, named Busboys & Poets for Hughes!)

After earning a college degree and moving to New York, Hughes would go on to create some of the most memorable works of the 1920s. He continued to write for the next several decades, producing everything from operas to children’s stories. He also worked as a journalist, and later in life recorded spoken versions of some of his most famous poems.

He’s one of the best-known poets of the twentieth century – so much so that naming a son Langston is as definitive as naming him Lennon.

Or is it? Because just when I felt that Langston was almost always bestowed in honor of the Harlem Renaissance poet, I stumbled on a character from ABC’s One Life to Live.

Brittany Underwood played Langston Wilde, adoptive daughter to Dorian Lord. The character first appeared in 2006, and was part of the series for five years, making a special return for the last ABC episode of the show in 2012.

Still, the numbers suggest that this name is squarely on Team Blue. And some of the boys have clearly been named after the poet, like Langston Fishburne, son of actor Laurence Fishburne.

Over 100 boys were named Langston for the first time in 2005. Credit our appreciation for surname names like Logan and Landon, combined with an interest in hero surnames, like Lennon.

Do you think Langston will catch on?