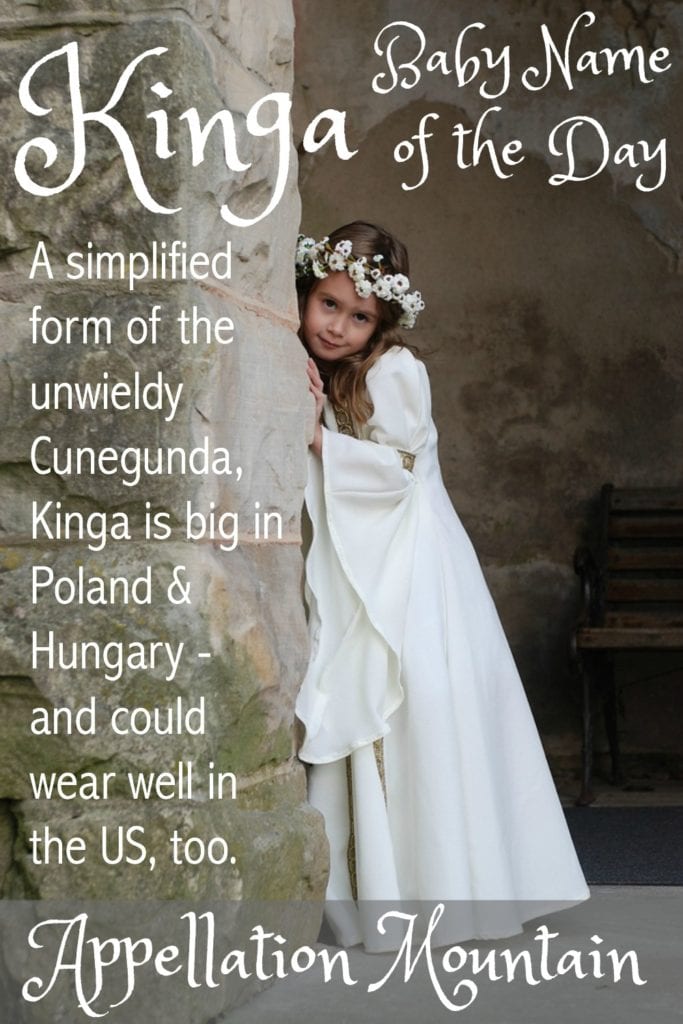 One tiny hitch: her name only seems unusual in English. Elsewhere, it is used as often as Jane. Thanks to Meg for suggesting our Baby Name of the Day.

Kinga sounds royal. But this name’s roots trace back to the Germanic Cunigunde. Or Kunigunde or Kunegunda, or … you get the idea. See the entry at the Dictionary of Medieval Names from European Sources for an even longer list.

Kuni refers to family or a clan, while gund means battle.

Various forms of the name appear in the ruling houses of Europe, especially Poland, but also Germany, Luxembourg, Lithuania, and Hungary, from the tenth century onwards.

Kinga evolved as a short form.

Like many an enduring name, a popular saint deserves much of the credit.

The future saint was born in the year 1224, a Hungarian princess. The princess married reluctantly, only after she and her husband, the Prince of Krakow, agreed to a vow of chastity.

Kinga worked tirelessly to serve the poor and the sick in her husband’s lands. After his death, she sold everything, donated the money to the poor, and joined a religious order.

Pope Alexander VIII beatified Kinga in the seventeenth century, but it was Pope John Paul II – the first Polish pope – who officially declared Kinga a saint.

She is considered patron of Poland and Lithuania, but also of salt miners. That’s because legend tells of a young Kinga, throwing her engagement ring into a salt mine in Hungary. The ring traveled to Wieliczka, Poland. Visit Wieliczka today, and you can tour the salt mines, as well as an underground chapel dedicated to the saint.

Factor in all forms of the name, and plenty of distinguished women are found:

I’ve compared Kinga to Jane, but that’s not quite right. In fact, this name might be more popular.

In Hungary, it has ranked in the Top 50 for the last decade. The same is true in Poland, though it actually made it as high as the Top 20 in recent years.

That makes it more like Leah, or maybe Sarah – a traditional, meaningful choice with a long and steady history of use.

In the US, the name remains a rarity. At least five girls have been given the name every year since 1987, ranging from 6 to 16.

Athletes and others – including model Kinga Rajzak – have raised the name’s profile slightly. It sounds like rising regal picks for boys, like Kingston and Kingsley, but the ‘a’ ending makes it unmistakably feminine.

If you’re looking for a distinctive Slavic heritage choice with an unusual, but straightforward sound, Kinga seems much easier to wear than many an import.

What do you think of this one? Can you see it catching on in the US?