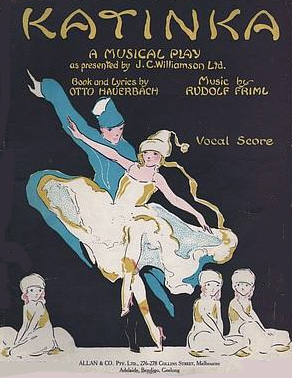 Katherine is evergreen, an enduring name worn by queens and saints.  This variation is a little less expected.

Thanks to Roksalanna for suggesting Katinka as our Baby Name of the Day.

English speakers tend to shorten names to arrive at diminutives.  Katherine becomes Kathy and Katie and Kate and even Kay – from centuries of history and three syllables to just the sound of a single letter.

Other languages are different.  Diminutive endings can make the nickname forms of names longer than the original.  Anna becomes Anita.  Or maybe just plain different – which seems to be the case here.

They feel like different names, barely related to the original, don’t they?

A handful of girls have been named Katinka in the US – seven in 1964, five in 1978, and five in 1992.  I expected the name’s use to coincide with American productions of Katinka, an operetta composed by Rudolf Friml.  It debuted on Broadway in 1915, and was successful as late as the 1940s.  But by 1964, it was obscure, so it doesn’t track with any of those dates.

Katinka seems to have been an original production.  In fact, the play’s name was originally Elaine, after producer Arthur Hammerstein’s daughter.  Miss Hammerstein was initially lined up to play the title role, but she left New York for the bright lights of Hollywood instead.

Then there’s Ved Vedjen, an 1886 novel by Danish author Herman Bang.  Bang is a big deal in Denmark, and Ved Vedjen is a classic.  In 1988, Ved Vedjen was adapted as a film, titled Katinka, in honor of the main character, Katinka Bai.  All versions of the story are pretty obscure in English, so what could it be?

In 1964, writer Katinka Loeser published her first collection of short stories.  She was much published in The New Yorker, so plenty of future parents must have seen her name – at least enough to inspire five girls’ names that year.  But I’m stumped by the 1979 and 1992 uses.

Maybe it is just that we’ve always been interested in Katherine and her many variations:

Another notable use was Milla Jovovich’s character in 2001 fashion farce Zoolander.

She’s heard most often in Danish, where the usual form of Katherine is Katharina, and Hungarian, where the usual form of Katherine is Katalin.  But you’ll also find her in other Slavic and Scandinavian languages, as well as German and Dutch.  De Spelbrekers had a hit with their song “Katinka” in 1962 – though I’m guessing Katinka probably feels pretty dated in the Netherlands.  I’ve seen the spelling Katenka mentioned, but that’s rarer than rare.

Overall, Katinka is a quirky possibility for a daughter, but her ties to Katherine serve as an anchor.  She could be a heritage choice, depending on your family’s background, and if you happen to know that Great Aunt Katherine answered to Katinka as a girl, well, that’s a plus.  Nowadays, there’s no need to shorten Katinka, but choices like Kat, Kit, and Kate are all options.  With a retro, offbeat vibe, Katinka could wear well in 2014.