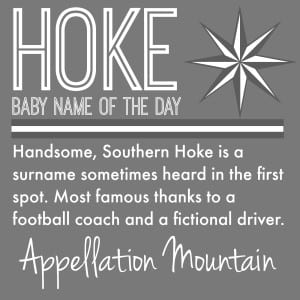 It’s a rare surname name with a Southern sound.

Thanks to Sarah for suggesting Hoke as our Baby Name of the Day.

There’s more than one possible origin for Hoke:

There are a handful of other possibilities, but whatever the origin, it’s clear that Hoke is at home as a surname.

There’s also Confederate major general Robert Hoke, who defeated General Grant at Cold Harbour in 1864 and went on to become a railroad executive.

Southern families are especially fond of surname names, and I mention the confederate officer because, sure enough, one of his descendants is among those to use Hoke as a first name.

There have been a few famous Hokes: The name’s history helps explain why Hoke feels Southern. But here’s the use that cements Hoke’s Southern sensibility: it’s the name of Morgan Freeman’s character in Driving Miss Daisy.

Alfred Uhry’s Driving Miss Daisy started out off-Broadway in 1987, with Morgan Freeman in the role of Hoke Coleburn. The play eventually made it to the West End and then Broadway, but you probably know it because of the 1989 award-winning movie adaptation, with Jessica Tandy in the title role.

It opens in 1948, with the wealthy, widowed Miss Daisy recovering from a car accident. Her son insists on a driver. Enter Hoke Coleburn, the long-time driver for a local judge. Over twenty-five years, and despite the challenges of their day, the two become fast friends.

Hoke: By the Numbers

That’s a handful of men answering to Hoke, none of them young.

Maybe parents are put off by the similarity to the words hokey and hokum, which mean exaggerated or contrived, or just plain nonsense. Think of the hokey-pokey, and turn yourself around …

And yet, Hoke has a strong sound and fits right in with lots of single-syllable names for boys. With the rise of short, sharp boy names, Hoke might wear well in 2015.

What do you think of Hoke? Great short, Southern name, or too close to the silly slang words?