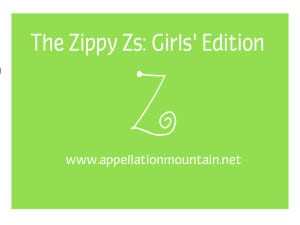 There’s something about the letter z.  It’s just one among 26 members of the alphabet, but it has an impact far greater than h or l or c.  Like all of the high value scrabble letters – q and x and j and k – z commands your attention.

It also seems to be present in a high percentage of requested names here at AppMtn.  And so this week’s list is devoted to the zippy Zs.  Naming a son?  Visit the Zippy Zs, Boys’ Edition.

Eliza – Not every zippy z name starts with z.  The lady-like Eliza brings to mind Audrey Hepburn in My Fair Lady.  There’s Elizabeth, too, of course, and other possible short forms like Liz.  But Eliza really emphasizes the z sound, while remaining a mainstream option.

Hazel – She’s a nature name with an edge, heavier than pretty Lily, a sister for all of those -v intensive girls’ choices, like Ivy and Olive.  Lily is a debutante, but Hazel is a rocket scientist.  Want something slightly showier?  Another botanical possibility with a z in the middle is Azalea, or even the french form Azelie.

Xena – She’s a warrior princess and a fifth-century saint.  Lucy Lawless’ television character looms large, making this tough to wear for a daughter right now.  But the reference will fade in another generation, while her sound will be as brisk and interesting as ever.  Hoping to use her today?  Spelling Xenia might make for a subtle difference – though it also obscures the pronunciation.  Another great x-makes-the-z-sound options is Xanthe.

Zara – Cara and Tara have had their time in the sun, but Zara is the royal one.  In the dystopian adventure V is for Vendetta, Queen Zara reigned.  She’s been on a slight uptick in recent years in the US, but remains relatively rare.

Zelda – She’s a jazz age staple, thanks Mrs. F. Scott Fitzgerald, and a video game legend.  Robin Williams claims to have named his daughter after the latter.  If you’re looking for something quirky, but not completely off-trend, she’s a distinctive Z name to consider.

Zenaida – An Eastern Orthodox saint who traces her name’s roots to the ancient god Zeus, Zenaida is an Eastern-leaning rarity.

Zenobia – If Zenaida is an exotic rarity, Zenobia comes from the same roots but exudes Americana, thanks to a Nathaniel Hawthorne character and Tina Fey’s firstborn, Alice Zenobia.

Zephyrine – Zephyr is the west wind, and Zephyrinus was a third-century pope.  Zephyrine is a French feminine form, and quite rare even among French speakers.  In the US, she’d be a gorgeous middle name, and a reasonably wearable rarity in the first spot, too.

Zillah – Yes, it is tempting to think of the lizard-like creature who destroyed Tokyo.  But Zillah is a legitimate name from the Old Testament, and appeared in the US Top 1000 a few times in the late nineteenth century. Of course, that was well before the iconic movie monster first roared.

Zinnia – Looking for an unusual bloom?  Zinnia fits the bill.  She’s easy to spell and pronounce, unlike Fuchsia.  And her sound is on trend with lots of other lovely names for girls.

Zipporah – She doesn’t just start with z, she begins with zip!  And yet Zipporah is one of the clunkier names on the list, perfect for parents considering Old Testament appellations – she’s the wife of Moses.

Zola – She’s Lola with a literary twist, thanks to French author Emile Zola.  It’s also a Zulu name meaning quiet – think of South African-born Olympic champion Zola Budd.  And while Zola might sound nouveau, she’s actually retro.  The name ranked in the US Top 1000 every year from 1880 through 1941.

Zuleika – Her sound is mysterious, and the many literary characters who have shared her name are equally intriguing.  A Persian name connected to a Biblical character, it was famously used for a 1911 character in Max Beerbohm’s novel Zuleika Dobson, or an Oxford love story.

What’s your favorite Z name for a girl?  Would you use any of these?  How ’bout the more popular choices, like Zoe?