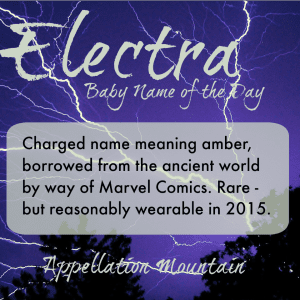 Looking for a daring name for a daughter? Here’s a borrowing from Greek myth that could satisfy.

Thanks to Alli for suggesting Electra as our Baby Name of the Day.

The first word that comes to mind is electrifying.

Only that’s not the origin of this name.

Electra is the Latin form of the Greek Elektra, from elektron – amber.

Amber became a twentieth century favorite for girls, but back around 600 BC, Thales discovered that rubbing amber with fur produced a charge – even a spark.

Fast forward to the seventeenth century, and scientists like William Gilbert of England and Otto von Guerike of Germany were experimenting with the phenomenon. Electricity became the accepted term.

It was only a matter of time before electric typewriters, electric guitars, and Billy Elliot singing “Electricity” on Broadway fixed the word in our minds in a very different way. Now it’s about energy and excitement. Way back, before Broadway, Electra was the daughter of Agamemnon and Clytemnestra. Her mother conspired to murder her father. Electra and her brother Orestes, in turn, offed Clytemnestra.

Both Sophocles and Euripides featured the story in their tragedies, and countless works of art, as well as an opera by Richard Strauss, amplified the tale.

In 1931, American playwright Eugene O’Neill retold her story in a modern setting. O’Neill kept all of the murder and pathos in Mourning Becomes Electra, but changed the character’s name to Lavinia.

Freud named the Electra Complex after her; it’s the feminine equivalent of Oedipus.

Greek myth also gives us the Pleiades, the seven daughters of Atlas and Pleione. One of them is named Electra, as is the star in the corresponding constellation. A few other minor characters also wore the name.

Frank Miller gave us a ninja assassin called Elektra Natchios in Marvel Comics’ Daredevil franchise back in 1981. Early days, Elektra is a possible love interest for Daredevil, but it didn’t work out.

Elektra has been coming and going ever since. In 2003, Ben Affleck played Daredevil on the big screen, with  Jennifer Garner as Elektra. Jen was still saving the world as Sydney Bristow on Alias, so the role was a natural fit for her. Jen and Ben married shortly after the movie’s premiere, and in 2005, Jen returned to the role in a movie all about the sai-wielding ninja.

Before the action movies, there was:

Overall, Electra is a daring choice – distinctive, attention-getting, impossible to ignore. Italian form Elettra seems slightly softer. And yet, in age where ancient names are embraced, Electra seems more wearable than ever.

What do you think of Electra – overlooked ancient name, or over-the-top?