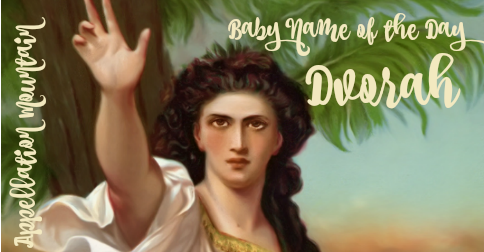 Dvorah sounds exotic, but this name is cousin to a former Top Ten favorite.

Thanks to Kaeli for suggesting our Baby Name of the Day.

Debbie is a Baby Boomer, a snack cake spokesperson.

In the Old Testament, Deborah is a hero, leading the Israelites to victory over the Canaanites.

The name’s meaning is usually given as bee, but any Biblical name is likely to have multiple interpretations.

It’s yet another name that caught on outside of Jewish families only after the Protestant Reformation.

So what’s with the funky Dv spelling?

Remember that English doesn’t use the same alphabet as Hebrew, and there’s room for variation and interpretation when translating – or transliterating – between two alphabets. Dvorah was already a respected leader – a prophet – in Israel when she made her stand, leading Israel to overthrow Canaanite rule.

She encouraged her people to rebel, and they won a decisive victory against King Jabin. The commander, Sisera, escaped, but wa

s done in by Yael, in another gory story.

A song of praise is sung in the Book of Judges, and Dvorah is often referred to as “mother of Israel” for her leadership.

While Deborah has lost some of that luster – we just know too many Debbies! – all of the Dv- and Dev- spellings connect the name to its Old Testament roots.

Dvorah: By the Numbers

While Deborah has a long history of use in English, and reached the US Top Ten between 1950 and 1962, all of the Dv- forms are rare: 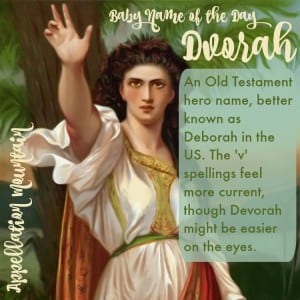 Spelled with or without the final h, this feels like an Israeli name, and that’s probably because it’s most common there:

File this one with Shoshannah and Rivka. While the name has seen some use elsewhere in the world, if I met a Dvorah, I would guess that she had roots in Israel, or at least came from a Jewish family.

And yet I’m not sure it has to be exclusive to families of Jewish heritage. Deborah, after all, has long since become mainstream for families of many different faith traditions.

The Dv- spellings are authentic, and yet they lack a certain phonetic transparency. Kveller lists Devorah and Devora, along with with Devra. I do think those might be the most wearable of the possibilities in American English today.

And I do think it’s wearable – an ancient spin on an enduring name.

What do you think of Dvorah? How would you spell it?