Parents revive ancient names all the time.  With choices like Penelope and Levi in the US Top 100, it’s clear we’re not afraid to reach into the distant past.  But how ’bout those overlooked Anglo-Saxons?  When is it their chance for a comeback?

Thanks to Anonymous for suggesting one they’ve considered for a son.  Our Baby Name of the Day is Cynewulf.

When the Normans invaded England, they brought their culture and language with them.  Many of the names we use today can be traced back to Germanic names worn by the invaders, and the first few generations of Anglo-Norman ruling families.

But not all.  Plenty of Anglo-Saxon choices were revived during the eighteenth and nineteenth centuries.  Think of Alfred and Edith.

Of course, those names were rescued from their Old English roots, re-shaped into something approachable for modern English speakers.

Cynewulf has remained obscure, and so you might be wondering about pronunciation.  It’s actually pretty straightforward: KIN eh wulf.

Perhaps swapping the ‘cy’ for a ‘ki’ would simplify things further – Kinewulf? And yet, there’s something really appealing about the obviously not English-as-we-know-it Cynewulf.

Cynewulf: In the History Books

There are at least three Cynewulfs of note, all likely living during the eighth century:

Maybe Cynewulf was the Liam of the eighth century, a wildly popular name heard everywhere. Or maybe it’s just coincidence that there are three men with the same name during the same century.

As for wulf, well, that’s good old wolf, as in Wolfgang, but also Oswulf, Eadwulf, and Wulfthryth, to name just a few.

While we tend to link the elements and give meanings like “royal wolf,” it appears that Anglo-Saxons thought about names differently. The elements weren’t necessarily related, and often children shared a name element with a parent, sort of like naming your kids Jayden, Jayla, and Jayme today. 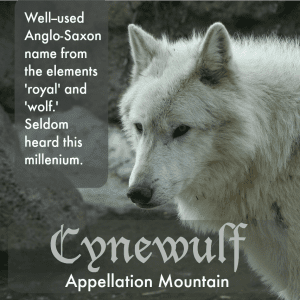 Cynewulf is a rarity.  It’s never been given to five children born in the US in a single year.  And it is missing from US Census records, too.  It appears that there may have been a handful in the UK, and maybe in Canada, too.

But in the US? Cynewulf is all but extinct.

And yet, there’s some potential here. Parents are embracing choices like Fox and Wolf.

So if you don’t mind explaining that it’s the name of an eighth century poet, and no, you didn’t get it out of a fantasy novel, Cynewulf could be a wearable rarity.  And it’s a fascinating middle name possibility too.

What do you think of Cynewulf?  Is it wearable today?