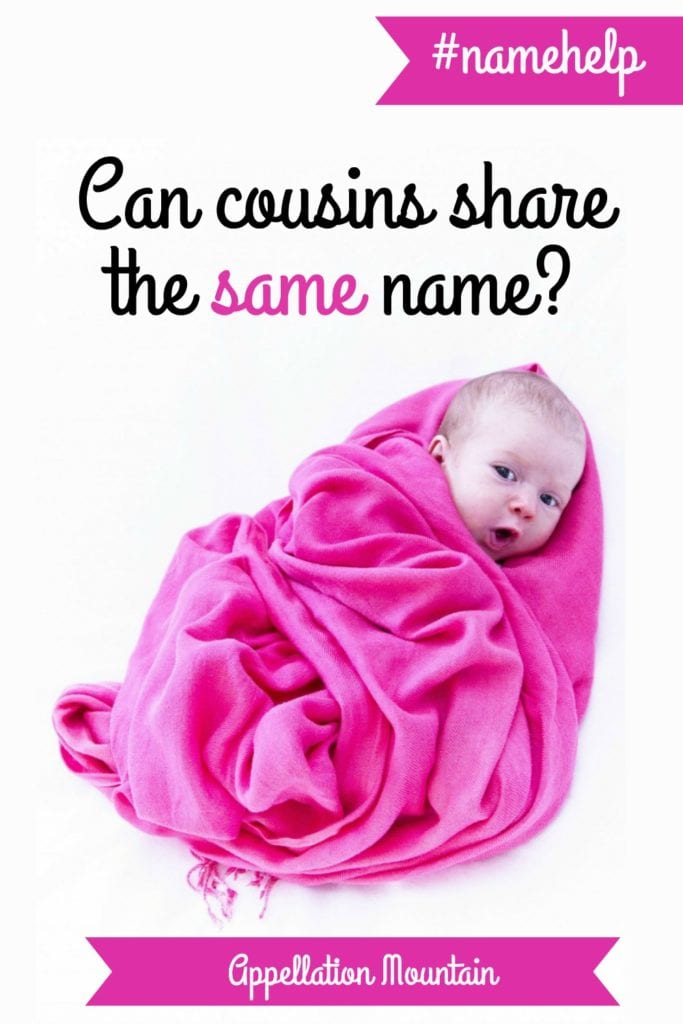 EDITED: We have an update! Scroll down to find out what they named their daughter.

We have two boys, and are expecting a girl this fall. I’ve had a girl’s name picked out since before we found out our first was a boy.

The girl’s name is Adeline. I know it’s gotten more popular, but it’s the only name my husband and I really like. It goes well with her brothers’ names – Oliver and Simon – and with our short last name.

Everything was set until a few days ago. I mentioned the name Adeline to my mom, and she said that I couldn’t use it. Why? Because my cousin just named her daughter Adilyn. Or maybe Adelyn or Adilynn. She wasn’t sure about the spelling.

My cousin is more than ten years younger than me, and has always lived on the other side of the country – and still does. My mom talks to her mom, my uncle’s wife, pretty often. But my cousin and I aren’t close. We’re not friends on Facebook or anything like that, either – in fact, I don’t remember really knowing she was pregnant. I was in high school the last time we saw each other.

Not that it matters, but I told my mom this was our girl name before Oliver was born, so it’s not like it’s new, either.

Do I ignore my mom? Or should we re-consider? Can cousins share the same name? There really isn’t a second-place name at this point.

How exciting to be expecting your first daughter! And finally getting to use a long-loved name carries a special kind of joy, doesn’t it?

I suspect you – and everyone reading this! – knows my answer. Heck, I think you know the answer.

Relationships matter more than names, even our favorite names. So it’s kind – and appropriate – that you’re willing to consider choosing something new.

Except this doesn’t sound like much of a relationship! You don’t live anywhere near each other, and you don’t stay in any kind of communication. Other than your mom mentioning it, there’s no reason you’d be aware that your cousin had a child, much less a girl named Adelyn. (Or some variation thereof.)

So … even though “cousin” may signal close family ties, in this case, it does not. It’s almost like your mom saying, “Oh, remember my friend Kathy? You met her that one time we went to Dallas? Her daughter named her daughter Adeline, too.”

Because here’s the next part: you mentioned that Adeline has become more popular, and you don’t mind. (And I don’t think you should, either.) Kelli Brady’s annual Playground Analysis at Nameberry confirms this. Tally up all of the spellings currently ranked in the US Top 1000, and Adeline + friends rise to the #6 spot in the US, behind only Sophia, Olivia, Emma, Ava, and Isabella.

A few generations back, cousins cheerfully shared names. Classrooms were filled with Mary, Mary Anne, and Mary-called-Mimi. The search for one-of-one names qualifies as a recent phenomenon. And yet, if you draw your circle wide enough, I’m sure that you can think of a few other girls named Adeline – or Addison or Madelyn or another similarly popular name.

Once you decide to disregard popularity, it means accepting that names will repeat – even within your extended family. We’re not back to the age of many Marys, and it’s not even as dramatic as the Jennifer explosion of the 1970s. But you’re making a choice to bestow a much-loved name that happens to be fairly common, and occasionally meeting another child with the same (or a similar) name comes the package.

Now, what to say to your mother? I think you emphasize that it’s a great name. You’re pleased for your cousin. But it doesn’t change your plans. After all, these second cousins, or first cousin-once-removed (I can never keep those straight!) may never meet. Fingers crossed that she’ll back off once she realizes you’re not inclined to choose a different name – and you might even gently remind her how many years you’ve been planning to name a daughter Adeline.

Can cousins share the same name? Like so many things, it depends. If you were living in the same small town, and both girls shared the same surname, too, my answer would be different. But in these circumstances, there’s no reason in the world to prioritize a non-existent relationship over your own preferred name.

Let’s have a poll, just to make it clearer:

Update! They named her Adeline.

Sharon writes, “After reading all of the comments, I decided that I just wouldn’t talk about it with my mom again, and wait until she was born. When my mom came to the hospital, she said something about thinking that was my cousin’s daughter’s name, but then she went right back to holding her granddaughter. Maybe it will come up later, but I’m SO SO SO glad we used the name. Please say thanks to everyone for their help!”