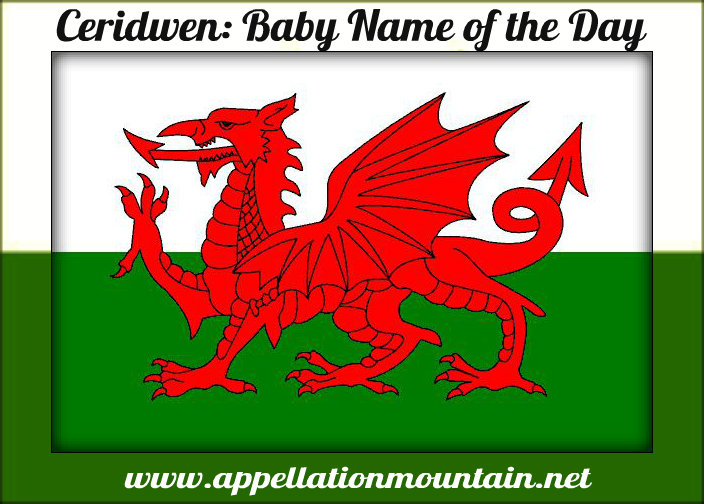 She’s a lovely Welsh heritage choice, but would she ever be pronounced correctly in the US?

Thanks to Lola for suggesting Ceridwen as our Baby Name of the Day.

This is an issue.  Much like Aderyn, it just isn’t an intuitive pronunciation for American English speakers.  I want to say KER eh dwen or care EH dwen instead.

Assuming that the confusion is tolerable, there’s much to love about Ceridwen.

She comes from cerdd – poetry or song – and that familiar Welsh element gwen – fair or blessed.

The name was worn by a goddess.  The short version of the medieval tales:  Ceridwen possessed the cauldron of poetic inspiration, and is the creator of Taliesin, the great Welsh poet.

Things get murky here, and the story is far longer.  First, Taliesin was a historical figure, a sixth century poet.

Legend tells us that he started life as Ceridwen’s servant,  a regular boy with a different name.

Ceridwen had a son, a creature astonishingly ugly.  The goddess prepared an elaborate potion, in an attempt to endow her son with gifts to compensate for his lack of good looks.  Only the servant boy accidentally consumed the potion.

Knowing he was in for it, the boy fled.

The chase scene that followed must have been spectacular.  Both the goddess and the boy transformed into various creatures, attempting to outwit the other.  Eventually, the servant boy became a kernel of wheat, and tried to hide in a grain cellar.  Ceridwen turned into a bird and gobbled him up.

But the servant boy’s story didn’t end there.  Ceridwen found herself pregnant, and the boy was reborn as Taliesin.

There is some debate as to the exact derivation of her name – and if you read the entire myth, there are fascinating possibilities.  Nook of Names had a great post on the goddess.

Ceridwen’s story has been known for generations.  She’s wrapped up with Arthurian legend, and Victorian poets re-told her tale.

Like many a name borrowed from myth and literature, Ceridwen was first used as a given name in the nineteenth century, though it is possible that related names were in use earlier, and certainly Gwen names, like Gwenllian, have a long history of use.

The nineteenth century was a popular moment for borrowing names from such sources, and chances are she wasn’t the only one.  By the late 1800s and early 1900s, there are a smattering in the US Census records, too.

The logical nickname for Ceridwen is Ceri, pronounced like Carrie — a convenient short form, but one that doesn’t help with the confusion.  Keridwen/Keri is much less common, but could be easier to pronounce.

Still, Ceridwen isn’t completely unknown.  There’s Babble contributor Ceridwen Morris, for one.  The 1939 novel of a close knit family in a Welsh mining town How Green Was My Valley included a character called Ceridwen.  A wildly successful 1941 film adaptation followed, but the character doesn’t appear in the movie.

If you’re after a distinctive Welsh heritage choice and don’t mind a little repetition, Ceridwen could be an appealing option.